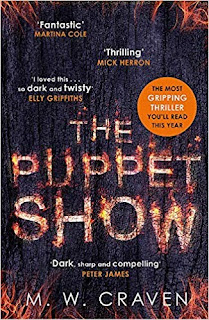 He pulls their strings. He watches them burn. Welcome to the Puppet Show…

A serial killer is burning people alive in the Lake District's prehistoric stone circles. He leaves no clues and the police are helpless. When his name is found carved into the charred remains of the third victim, disgraced detective Washington Poe is brought back from suspension and into an investigation he wants no part of . . .

Reluctantly partnered with the brilliant, but socially awkward, civilian analyst, Tilly Bradshaw, the mismatched pair uncover a trail that only he is meant to see. The elusive killer has a plan and for some reason Poe is part of it.

As the body count rises, Poe discovers he has far more invested in the case than he could have possibly imagined. And in a shocking finale that will shatter everything he's ever believed about himself, Poe will learn that there are things far worse than being burned alive ...

My thanks first of all go to the author and publisher for providing me with a copy of this book.

This is the first book I’ve read by M. W. Craven and this had me hooked from the first few pages. I found the story kept me wanting to know more and drip fed me enough information to keep the suspense going.

The camaraderie between Poe and Tilly was at times amusing with some of the things they did, but you knew that they were a team who had each other’s back despite Tilly not being a police officer.

Normally I would go into a little bit of detail about the book and some of the story but I feel that if I did, would spoil your enjoyment.

M. W. Craven was born in Carlisle but grew up in Newcastle, running away to join the army at the tender age of sixteen. He spent the next ten years travelling the world having fun, leaving in 1995 to complete a degree in social work with specialisms in criminology and substance misuse. Thirty-one years after leaving Cumbria, he returned to take up a probation officer position in Whitehaven, eventually working his way up to chief officer grade. Sixteen years later he took the plunge, accepted redundancy and became a full-time author. He now has entirely different motivations for trying to get inside the minds of criminals . . .

The Puppet Show, the first in a two-book deal he signed with the Little, Brown imprint, Constable in 2017, was released to critical acclaim in hardback in 2018. It has been sold in numerous foreign territories and the production company Studio Lambert, creators of the award-winning Three Girls, have optioned it for TV. The sequel, Black Summer, follows in June 2019.

M. W. Craven is married and lives in Carlisle with his wife, Joanne. When he isn’t out with his springer spaniel, or talking nonsense in the pub, he can be found at punk gigs and writing festivals up and down the country.

Posted by Reading for Pleasure at 17:19 No comments:

Rocky Rocks and The Colourful Socks 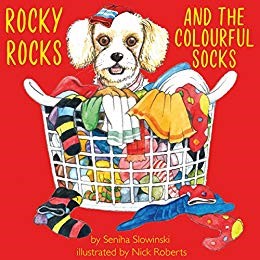 Can you help Rocky Rocks find his socks? If you can see, you must tell me, what colour sock you can see? I’ll give you a clue, it rhymes with bed, could it be the colour… Rocky Rocks and the Colour Socks is a fun and interactive way of learning through rhyme by Seniha Slowinski. Illustrations by Nick Roberts.

This is a lovely rhyming book based around a little dog who loves playing with socks.  We follow Rocky around the house as he hides / finds socks.

This book can be used as a game of hide and seek by someone reading the text and the child finding the missing sock.

Lovely colourful pictures and a pleasure to read this book.  Suitable for children under the age of 5.

Posted by Reading for Pleasure at 16:35 No comments:

Today I am pleased to be able to participate in the blog tour for Daisy Daydream by Sue Wickstead.  My thanks go to Rachel’s Random Resources. 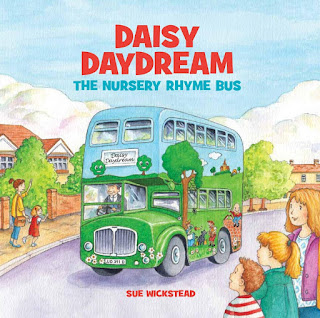 Daisy was a happy red bus who loved travelling the busy streets of London.

When newer and shinier buses came along, the older buses like Daisy began to disappear.

Would Daisy become one of the forgotten buses, or was something else planned for her?

A delightful book about an old red routemaster bus who went from travelling the streets of London carrying passengers to becoming one of the buses no longer needed due to newer more efficient buses coming in.

Is Daisy going to be a bus that time forgets or will she get a new lease of life?

An excellent book full of lovely colourful pictures that explain the story as you turn each page. A lovely story of what happens to Daisy and one that children of preschool to approximately age 5 will enjoy.

I also have a review from my daughter who also read this book.

This was an amazing book to read and is aimed at preschool to Year 2 children.  This is a good way to teach children a lesson about looking after things and maybe learning them to recycle things that rarely get used that much.

I am a teacher and an author and have currently written six children’s picture books with a bus theme.

For over 20 years, alongside my teaching career, I worked with a Children’s Charity, The Bewbush Playbus Association, which led me to write a photographic history book about it.

I soon found that many children had never been on a bus before, let alone a ‘Playbus’ and they wanted to know more. I decided to write a fictional tale about the bus, his number plate JJK261 gave him his name.

‘Jay-Jay the Supersonic Bus,’ came out in print in 2014. It is the story behind the original bus and is his journey from a scrap-yard to being changed into a playbus for children to play in. From Fact to fiction the bus journey continued. 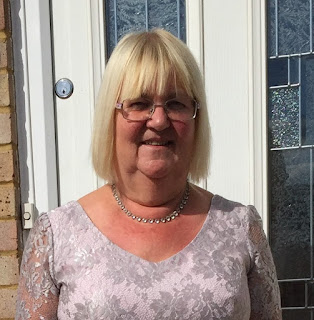 This story has now been followed by five more picture books.

I also undertake events and author bookings and love to share the story. There are also a few more stories in the writing process, with links to real events and buses.

The story has been read in many schools in the south-East of England, where I teach as a cover teacher, it is always well received and certainly different. 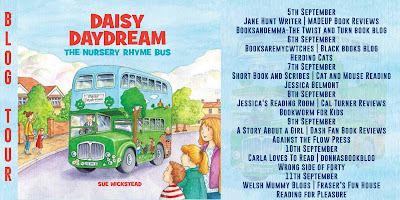 My thanks to Sue Wickstead and also Rachel @ Rachel’s Random Resources for my spot on the blog tour.

Posted by Reading for Pleasure at 07:30 No comments: