Extract from Just One Time

Just One Time
The first novel by K.S. Hunter, the alter ego of an international bestselling author, whose identity will remain a secret.


Desire can have dire consequences
Two years ago, David Madden made a mistake that almost cost him his marriage. His wife, Alison, gave him another chance, but she has not forgotten, nor has she forgiven.


She is irresistible
Then David meets the alluring Nina at a theatre in London. When he loses his phone in the dark, she helps him find it, and by giving her his number he unwittingly invites her into his life.


What David initially views as an innocent flirt turns into a dangerous game of deception. His increasingly suspicious wife thinks something is up, and each lie he tells pushes them further apart.
She is insatiable


Nina pursues David relentlessly, following him to New York where she gives him an ultimatum: sleep with her, just one time, and then she’ll get out of his life forever; or she’ll ruin everything he holds dear.
She is unstoppable


Of course, once won’t be enough for Nina, and what David hoped would be the end is merely the beginning.
A modern-day Fatal Attraction, Just One Time is a steamy psychological thriller that will have you hooked from the first page and holding your breath until its shocking conclusion.


Praise for K.S. Hunter
‘An author to watch out for – always interesting and unpredictable’ Sophie Hannah


Today I am honoured to be taking part in the Blog Tour for #JustOneTime by K S Hunter.  My thanks go to @rararesources for inviting me to take part

Now if that above wasn't enough to tempt you, I have a extract which will definitely tempt you and make you want to click, buy and read and then when you have read it make sure you leave a review! 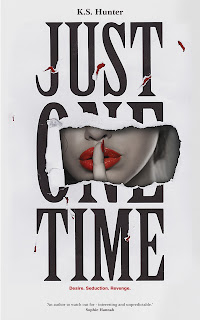 Extract from Just One Time by K.S. Hunter, Chapter Two


I arrived home just under an hour later. I parked in the driveway, locked the car and walked to the front door. A three-bedroom semi-detached property, only five years old, in St Albans, an expensive but attractive small city just north of London.
We moved into it when it was a new-build, when we’d just got married, when everything was fresh and exciting, before I ruined it for us by sleeping with a colleague who then didn’t take too kindly to me saying it was a mistake and that it shouldn’t – no, couldn’t – happen again. Who then spilt the beans to my wife, tore apart my marriage and almost permanently destroyed it. I fought for it, was desperate to save it, but merely managed to clutch hold of its separating ends.
As a result of my actions, our marriage was held together by Velcro and had remained that way for the past two years. An angry wife, an unforgiving one, one who remembered my actions and responded to my betrayal in every look she gave me, in every word she said to me, in every movement she made around me. She ensured I recognised her feelings of betrayal, endlessly. And I was tiring of it, but I knew that only I was to blame for the state of things.
I opened the front door of what was supposed to be our dream home. As I stepped in, I realised I’d forgotten to buy some flowers on my way back. Flowers for Alison. The house was dark inside, which suggested that my wife was already asleep. So gloating about the play would have to wait until the morning.
I grabbed myself a beer from the fridge and quickly drank it. I checked the back door was secure, the front door was locked, and went upstairs, heading straight for the bedroom.
My wife was indeed asleep, perched on her side as if she were speaking to my horizontal form beside her. Only I knew it was unlikely that she’d speak to me while in bed, for in bed we did little together, rarely even talk – one of the many consequences of my actions two years ago.
I removed the wallet and phone from my pockets and placed them on the chest of drawers, then pulled off my trousers and shirt. Keeping hold of them, I left the bedroom and went into the bathroom, which was down the corridor, where I put the clothes in the washing basket and hopped into the shower.
Ten minutes later, refreshed and with teeth brushed, I returned to the bedroom.
My wife opened her eyes, sighing angrily, loudly, exaggeratedly. ‘Do you have to make so much fucking noise?’ I knew that if I answered back, telling her I was being as quiet as possible, which was the truth, she’d only become incensed, raging more and more, louder and louder, until she was fully awake, unable to fall back to sleep, and then she’d blame me for waking her and for keeping her awake.
So I merely whispered, ‘Sorry.’
‘So fucking noisy.’
I retreated to the bathroom, hoping that if I gave her a few minutes alone she’d relapse into sleep and I’d get a reprieve. I heard her voice, no doubt swearing even more and becoming further incensed because of my inconsiderateness, while I moved along the corridor. I couldn’t make out any of her words and simply chose to sit on the toilet until I heard no more, before returning to the bedroom.
When I decided to see if the coast was clear, I switched off the light and crept back into the bedroom. I breathed easy when I saw she’d fallen back to sleep.
To my right, on the chest of drawers, my phone, whose case lay open, lit up. I walked over to it and picked it up. Glanced at the screen. A text message. From a number I didn’t recognise.
I opened the message. It was great to meet you tonight, David. Thanks for such a special time.
Movement from the bed startled me. ‘Will you go to fucking sleep?’ my wife, who’d stirred because of my movement, said through gritted teeth. Quickly and instinctively, without thought or hesitation, I deleted the message and closed the phone.
I slowly and quietly got into bed.
Another sigh from my wife. ‘You’re so fucking noisy all the time.’ I was expecting more, but there was a pause. Then, some moments later, ‘Who was that from?’

Fuck you, I thought but didn’t vocalise.
Now wasn’t the time to explain my whole evening to her, especially not when she was in one of her agitated I’ve-been-woken-up-who-do-you-think-you-are moods. Especially when she’d spoken to me like I was a piece of shit, again. ‘Just one of those Vodafone surveys,’ I lied. ‘Nothing important. Deleted it.’
She put her head back on the pillow and closed her eyes. ‘Well, do it quieter. You always make so much bloody noise.’
‘Sleep well,’ I said in a mock, calm tone, suspecting she might not nod off, awaiting a possible restart of her tirade if she couldn’t get back to sleep.
I closed my eyes, but as soon as my mind returned to the message I’d received, they sprang open.

If I didn’t tell her, how does she know my real name?


Author Bio – K.S. Hunter is the pseudonym of an international bestselling author. The identity of the author, who lives in the United Kingdom, will remain a mystery.

If you are tempted then the links are below for you to click and buy.

If you want to read some more reviews, then why don't you check out some of the bloggers who have already reviewed the book.