Today I am pleased to be able to participate in the blog tour for The Anglesey Murders by Conrad Jones.  My thanks go to Book on the Bright Side for my spot on the tour. 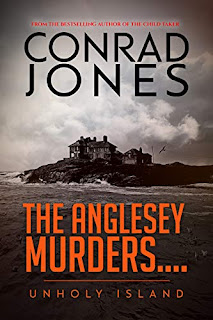 DI Alan Williams is called to the recovery of two bodies from the sea at Trearddur Bay, during a storm. The lifeboat crew suspect they’re fishermen, washed away by a wave but they’re wrong. Alan and his detective sergeant, Kim Davies, realise the men were beaten and tied together before they entered the water. Two miles along the headland at Porth Dafarch, a third victim is found but there are no obvious links. As the number of victims increases, a major investigation team battles to unravel a deadly puzzle which, appears to have links to a series of historic murders from the 90’s.

In 1995, Peter Moore owned and operated the cinema in Holyhead. It is thought he assaulted over 40 men and he was arrested and charged with four murders, which he’d committed in as many months. He was jailed for life in 1996 and is still the only recorded Welsh serial killer. Fast forward to today and Detective Inspector Alan Williams is investigating a series of murders with uncanny similarities to the Peter Moore attacks. Is there a copycat on the loose or are the murders connected to the local underworld, which controls the supply of narcotics across North Wales and the North West? Finding a motive, is the challenge he might not win. ALL THE TIME THEY’RE TRACKING THE KILLER, THE KILLER IS STALKING THEM…

Today I am pleased to be able to participate in the blog tour for The Anglesey Murders.  I have this book in my list to read shortly and have already read a couple of chapters but other things have overtaken things and I have been unable to pick this back up to continue reading.  However what I have read is excellent and I cannot wait for my weeks holiday to curl up on a beach and read (assuming the UK weather allows this).

In anticipation of my full review for those that follow my blog, I have a sneaky peak for you and am pleased to be able to share the Prologue for you.

Liam stepped over the low wall onto the clifftop. It was too dark to see the surf crashing onto the jagged rocks hundreds of feet below. Out to sea, the South Stack lighthouse stood stoic in the foaming sea; its powerful beam penetrated the darkness for miles. He sipped from the whisky bottle and felt the liquid burning his throat. It was an expensive single malt he’d saved for a special occasion. What could be more special than finding out his wife had been cheating with his brother? That was pretty special. Being made redundant the following day was special too, especially as the firm had gone bust and he wouldn’t be paid his salary or any redundancy pay. If there was ever a more special time, he couldn’t think of it.

Earlier, as his wife, Carla, walked out of the front door with his son and daughter and their suitcases, he’d made his mind up that he was going to kill himself. What was there to live for? Everything he loved had gone to live with the only family he had left. Wife, son, daughter, and brother gone in one breath, followed by the threat of financial ruin; he didn’t have many options. The thought of unemployment and being alone, without his kids, was devastating. He couldn’t go on. As he teetered on the edge of the cliff, his future played out before him. Divorce, repossession, bankruptcy, heartbreak, and despair.

He gulped the whisky and took a handful of tramadol from his pocket, swallowing them greedily. Better to numb his body as much as possible. He was a coward, Carla said. She was right. He wanted to die but he didn’t want to feel the pain of impact on the rocks, nor did he want to feel the bitter cold of the sea or suffer the dreadful panic of drowning if he survived the fall. Numbness was the answer. He filled his mouth with tablets again and washed them down with whisky. He heard the sound of a car on the wind. The headlights pierced the night and he heard a door open and slam closed. Then he heard footsteps on the gravel path. Someone was coming towards him.

Suddenly, he felt frightened. Frightened of falling over the edge, frightened of dying. Something inside him told him he had to pull up his big-boy pants and get on with it. Life was worth living. Was he the first man to feel the sting of betrayal? No, of course not. The wind rocked him and he could feel the fog of the drugs descending in his mind. He edged back from the abyss and held onto the low wall. The silhouette of a man appeared on the path. He walked towards him quickly. The car’s headlights picked him out against the dark sky. It was a common place for desperate people to contemplate life and death. Some walked away, others didn’t.

‘Are you okay?’ a voice asked from the darkness. Liam blinked against the lights.

‘Not really,’ Liam said. He swigged from the bottle again, almost draining it.

‘Are you thinking of stepping off the edge?’ the man asked.

‘Thinking about it, yes,’ Liam said. ‘At least, that was the plan. I can’t even do that right.’

‘You shouldn’t be too hard on yourself,’ the man said. ‘Life can be difficult sometimes. Death is a way out.’

‘I thought it was,’ Liam agreed.

‘You should embrace it,’ the man said approaching. He raised his right hand.

‘Embrace what?’ Liam asked, confused. The whisky was slowing him down. He tried to grasp the man’s hand.

‘Close your eyes and enjoy the ride,’ the man said. He shoved Liam hard in the chest.

Liam staggered backwards. He opened his mouth to scream but the wind took it away. His arms grabbed at thin air as he toppled over the edge. It seemed like an eternity before he hit the rocks.

The man waited and watched as the lighthouse illuminated the cliffs for a few seconds before it was plunged into darkness again. A wave swept the body from the rocks and sucked him beneath the surface. It was the first time he’d killed and it felt good.

Conrad Jones a 52-year-old Author, living in Holyhead, Anglesey, which I class as my home, before starting a career as a trainee manger with McDonalds Restaurants in 1989. I worked in management at McDonalds Restaurants Ltd from 1989-2002, working my way up to Business Consultant (area manager) working in the corporate and franchised departments.

In March 1993 I was managing the Restaurant in Warrington`s Bridge St when two Irish Republican Army bombs exploded directly outside the store, resulting in the death of two young boys and many casualties. Along with hundreds of other people there that day I was deeply affected by the attack, which led to a long-term interest in the motivation and mind set of criminal gangs. I began to read anything crime related that I could get my hands on.

I link this experience with the desire to write books on the subject, which came much later due to an unusual set of circumstances. Because of that experience my early novels follow the adventures of an elite counter terrorist unit, The Terrorist Task Force, and their leader, John Tankersley, or `Tank`and they are the Soft Target Series, which have been described by a reviewer as ‘Reacher on steroids’. 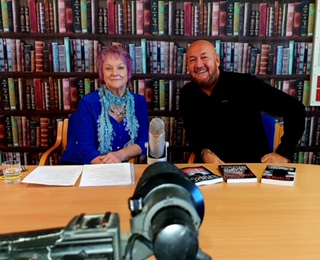 I had no intentions of writing until 2007, when I set off on an 11-week tour of the USA. The Day before I boarded the plane, Madeleine Mcann disappeared and all through the holiday I followed the American news reports which had little or no information about her. I didn’t realise it at the time, but the terrible kidnap would inspire my book, The Child Taker years later. During that trip, I received news that my house had been burgled and my work van and equipment were stolen. That summer was the year when York and Tewksbury were flooded by a deluge and insurance companies were swamped with claims. They informed me that they couldn’t do anything for weeks and that returning home would be a wasted journey. Rendered unemployed on a beach in Clearwater, Florida, I decided to begin my first book, Soft Target. I have never stopped writing since. I have recently completed my 20th novel, The Journey, something that never would have happened but for that burglary and my experiences in Warrington.

As far as my favourite series ever, it has to be James Herbert’s, The Rats trilogy. The first book did for me what school books couldn’t. It fascinated me, triggered my imagination and gave me the hunger to want to read more. I waited years for the second book, The Lair, and Domain, the third book to come out and they were amazing. Domain is one of the best books I have ever read. In later years, Lee Child, especially the early books, has kept me hypnotised on my sunbed on holiday as has Michael Connelley and his Harry Bosch Series. 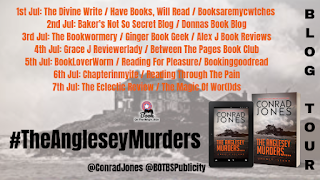 My thanks to Conrad Jones for providing this Prologue and also Sarah Hardy @ Book on the Bridge Side for my spot on the blog tour.

Remember to keep an eye on my blog in the next month or so for my full review of The Angelsey Murders.