One For The Road, Morgen Bailey #BlogTour #Extract

One For The Road

Today I am pleased to be able to participate in the blog tour for One For The Road by Morgen Bailey.  My thanks go to Sarah Hardy at Book On The Bright Side for my spot on the blog tour. 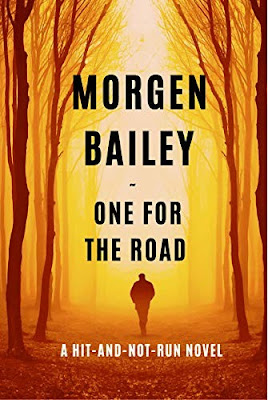 Panicked at killing a man on a Northamptonshire country road, drunk driver Liam Ross buries the body in the woods. The man was an undercover cop. When Liam returns to the woods… the body has disappeared.

Set in present-day Northamptonshire, England, ‘One for the Road’ focuses on three interweaving threads: the repercussions for drunk driver Liam Ross after he hits a man on a country road when yet another argument with live-in nurse girlfriend, Jo, has driven him to the pub on that fateful night; gang underling Barry ‘Not Gary’ Newman; and newly married Todd Litten aka Neil Ryder, the policeman who was just doing his job.

Today I am pleased to be able to share a little snippet of the book for you to read.

Liam stared down at the man. Apart from the blue eyes – so blue they were a walking cliché, or would have been before Liam hit him – everything about him was bland. His scruffy beard, brown like the long coat unfurled around him like Superman’s cape flying in the wind. No, darker, like something out of a Victorian movie, a foe that Sherlock would have been chasing in the dead of night. Like now.

The man’s shoes too were brown. One had stayed on, the other lying side down at the same angle as the man’s shoed foot, as if keeping unison even after death.

Liam wanted to fall to his knees, cry, tell the man he was sorry, but he stood up, inhaled until he ran out of air, held it in as long as he could as if to punish himself… but he knew the punishment if he got caught.

He wasn’t stupid. She knew he wasn’t stupid. They’d met on the same Egyptology course and they’d had long conversations about Ma’at and Egyptian religion, until they’d become one-sided conversations because he’d lost interest and not renewed, switching to European languages instead. He wished he’d gone with criminology.

Even the man’s trousers were brown. “Wanted to blend in around here, did you?” Liam shook his head. “Blended in too bloody well.”

He bent down and pulled at the man’s trouser legs. “Let’s get you out of here.” He was surprisingly light. Despite the coat exposing his top and trousers, Liam hadn’t noticed how skinny the man was. “Living out here, were you? Yes, I bet you were. Who are you, mate? Do you not have someone who loves you, who gives a sh…” Liam’s thoughts turned again to Jo. He wondered if she’d care if he’d be the one lying in the middle of the road, with a stranger dragging at his brown trousers. She would have once, but he knew things had changed, irreparable damage? Certainly if she ever found out.

Liam groaned as he pulled the man along the tarmac, but stopped as the man’s head scraped and bobbed along the ground. “Oh, Christ.” Liam moved to the man’s torso and scooping his arms under his shoulders, tried to drag him that way but Liam struggled to shuffle a few feet. He lowered him again and brought the man’s arms above his shoulders and pulled him along that way. It wasn’t quick but it was more humane. Liam watched as the man’s sock peeled off and deposited itself it on the roadside.

He heaved the man up the shallow embankment until there was enough distance between them and the road to be invisible. Liam’s back complained until he let go of the man’s arms, letting him fall onto the damp ground, and Liam was able to straighten up.

He knew he couldn’t leave him there. Even if few people walked their dogs, having him lying there, in amongst the sodden leaves, left too little to chance. Someone would spot him. Liam knew he’d have to come back, with a shovel, and bury… his name. What was his name?

Liam went back to the side of the road to fetch the shoe and sock and put them back on. “There we go, you’ll be warmer… What am I saying?” He looked up to the sky, breathed in, then puffed out the air, in then out until his neck began to ache.

“What have you got yourself into, Liam? You should have just left him there, stayed there, called the police, taken whatever… Too late. What’s done is done.”

Can’t wait to start reading this one which is sat patiently on my kindle waiting for me to pick up etc. 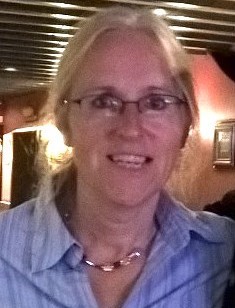 Smashwords (https://www.smashwords.com/profile/view/morgenbailey) and wherever books can be ordered. 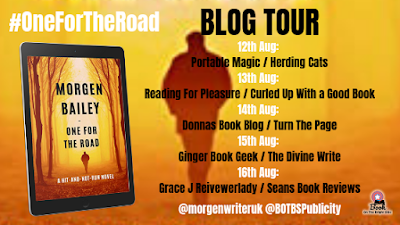 My thanks to Book On The Bright Side and Sarah Hardy for my spot on the blog tour.


Posted by Reading for Pleasure at 13:32