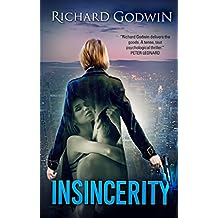 Ex-military PI, Tammy Wayne, tracks serial killers for a living. With the help of her colleague Arlene she locates a killer known as The Pimp, who killed her sister Holly.

The Pimp has Tammy under surveillance, coming and going to her house as he wants, sending her Holly’s body parts.

The Beekeeper, a killer that abducts women and coats them in latex before killing them, enters the story.

Karen Sincere is married to dangerous and disturbed Micky Sincere. His obsession with bees convinces her Mickey is leading a double life as a killer. She hires Tammy, who begins tailing Micky and discovers he is gay and is involved with a gangster named Gary Krane.

Karen meets the handsome Julius Gold in the exclusive Attic bar in Canary Wharf and starts an affair with him. The model Kitten Rogers, aka Ashley Greene - also having an affair with Julius - hires a detective. Ashley is convinced Julius is hiding something.

The Pimp closes in, abducting Tammy, Arlene and Ashley. Only Julius can save them - the man hiding his involvement with a gangster.

A novel replete with characters leading double lives, Insincerity's secrets are not yielded until the final pages.

Insincerity is about an Ex-Military PI called Tammy Wayne who is renowned for tracking down serial killers.

Tammy had a sister called Holly who was killed by “The Pimp”, and is set to taunt and torment Tammy and her girlfriend Arlene who has also got a connection to Holly.

I found parts of this book quite gruesome due to the descriptions that the author used to describe certain aspects of the book.  I’m pretty sure that was the authors intention and he certainly managed to do that with parts of this.

We are also introduced to The Beekeeper, another killer who this time abducts women and then uses latex to cover their bodies before killing them.

Apart from both killers collecting body parts what else do they have in common?

All in all I found this book and okay read and will confess I’m not 100% sure it would have been a book I would have personally chosen to read as despite reading on my kindle I’m a stickler (or can be) for reading a book based on a cover and this cover really didn’t appeal to me.

Richard Godwin was born in London and obtained a BA and MA in English and American Literature from King's College London, where he also lectured.

You can find out more about him at his website www.richardgodwin.net, where you can also read his Chin Wags At The Slaughterhouse, his highly popular and unusual interviews with other authors.

Posted by Reading for Pleasure at 16:48