Today I am pleased to be able to participate in the blog tour for The Failsafe Query by Michael Jenkins.  My thanks go to Rachel at Rachel’s Random Resources. 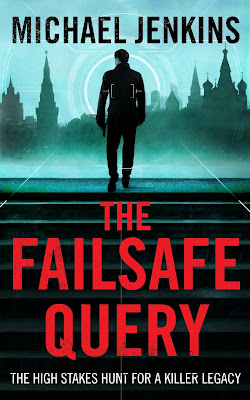 The Failsafe Query is a gripping thriller set in the contemporary world of modern British espionage.

Sean Richardson, a disgraced former intelligence agent, is tasked to lead a team to search for Alfie Chapman, an Intelligence officer on the cusp of exposing thousands of secrets to the media. This includes a long lost list of Russian moles embedded since the Cold War, one of whom remains a public favourite in the British parliamentary system.

The action moves with absorbing pace and intrigue across Central Asia and Europe as the puzzle begins to unfold through a deep hidden legacy.

Tense, fast paced, and insightful, The Failsafe Query twists and turns to a satisfyingly dramatic finale.

Today on my blog, the author Michael Jenkins joins me to tell me all about his writing journey.
Many of my friends and family were quite surprised when they eventually learnt that I had written a novel – so much so, that I was inundated with texts, calls and e mails inquiring how on earth I’d done it. You see, in the military, we were all used to crafting detailed reports and assessments based upon rules. The rules of military writing. They are as precise as you’d ever imagine, strict, formal, and very much rules based.

I remember being coached in the art of military writing, receiving brutal critique and feedback, but ever so slowly learning to become what is known as a staff officer – a commissioned officer serving on the staff of a commander, service, or central headquarters.  An officer who is clinical in writing reports and intelligence assessments based upon those rules.  There was very little scope for creativity, but as a counter terrorist and intelligence officer, I did have scope to create my own justifiable ‘assessments of the situation and threats.’

So, to move from rules-based writing, to creativity and telling a story was a long, long, journey. And I’ll be forever grateful to the first editor I dared show my manuscript to. His name is David Thorpe. And he’s a novelist, screenwriter and comics writer from Wales. We met in Baker street, London, where I lived at the time, and he delivered the hammer blow right there and then over coffee. It was crap. From a reader’s perspective of course. The reader would hate it. Really good story though he said.

You see, I had been conditioned, trained, and driven to write in a military style. It was too much like report writing he said. Great story, fascinating career you’ve had, he said. But thankfully he was brutal and to the point. ‘Go away and learn how to write creatively.’

It was a bright summers day in Baker Street, and I felt pleased he had been forthright with me. I like clear and unambiguous feedback. I was brought up with it in the military, and that often helped us all reflect on our own failings, making sure we learnt quickly.

David and I had a bite to eat and he told me of how he plans his novels, uses his creative mind, takes himself away from real life and into a journey of his characters. I listened intently, eager to learn, and he listened intently to my own stories of service in the Balkans, the Middle East, and across the globe. He was fascinated with my stories.

His earnest feedback, accompanied by a 27-page editor report was just what I needed. A kick up the backside, and a nudge from a coach from to escape my rules-based world I had lived in for nearly three decades.

He told me to be a story teller. And he was absolutely right. Don’t worry about the prose he said, don’t be fluffy and feathery in your words and sentences. You have the experience to draw readers in and provide remarkable insights into your world. Write the story but be creative. Embellish the scenes, understand POV, know what the reader wants, give them suspense, a cliff-hanger on each chapter, and a story arc that will keep them entertained and wanting to turn pages.

That first manuscript was obviously ripped up and I began again. I studied characterisation, plot planning, the growth of your main character, conflict, sub plots, switching POV, head hopping mistakes, the lot. All online. And then I read. I read loads of books, loads of thrillers, and then I tried as best as I could, as a debut novelist, to find my own voice.

I feel as if I’d been put through a mill and spat out the other end as a new person. A person that could now remove the shackles of rules-based writing and into creative writing. I’ve thoroughly enjoyed it and I hope people continue to enjoy my debut story. For that is exactly what it is. A made-up story, written this time round with better structure that hopefully the reader can engage with. There are plenty more if people actually like it. I have always wanted the reader experience to be one of ‘wow,’ great story, really insightful, and up to date with topical events.

Of course, I was lucky to be able to draw upon my own experiences across a multitude of disciplines I was privileged to undertake in the military – and the characters are all based upon some real people I served with, with each character being formed from or a mix of all of their foibles, charisma, and gregarious nature.  They are all legends in my eyes, great men and women doing some incredible things for our country and the safety of ours, and other citizens.  As for the themes of the story, well, I hope they come out for the reader. It’s a mixture of politics, intelligence, treachery, reprisal, and ambition.  I do hope you like the story’s journey and its hugely colourful characters. It’s been some journey!

Well I don’t know what you all thought about my guest post from the author, but I found that very interesting.  Even better I have a lovely giveaway for you and all you need to do is click on the link and you could win a paperback copy of The Failsafe Query* (5 to be won in total) and there is also a spy linkage map (unframed).  This giveaway is open internationally.  Good Luck. 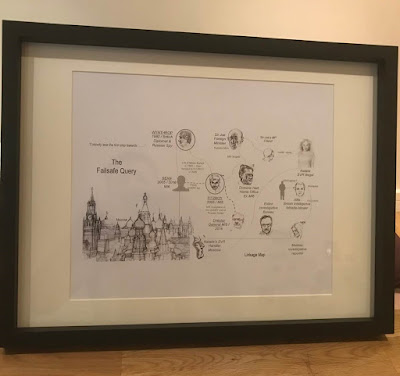 Click here to enter the Rafflecopter
About the Author

Michael Jenkins served for twenty-eight years in the British Army, rising through the ranks to complete his service as a major. He served across the globe on numerous military operations as an intelligence officer within Defence Intelligence, and as an explosive ordnance disposal officer and military surveyor within the Corps of Royal Engineers.

His experiences within the services involved extensive travel and adventure whilst on operations, and also on many major mountaineering and exploration expeditions that he led or was involved in.

He was awarded the Geographic Medal by the Royal Geographical Society for mountain exploration and served on the screening committee of the Mount Everest Foundation charity.

He was awarded the MBE on leaving the armed forces in 2007 for his services to counterterrorism.

The Failsafe Query is Michael’s first novel. He has started work on his second spy thriller, The Kompromat Kill, and hopes to publish it the spring of 2019. 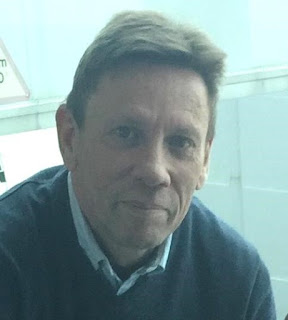 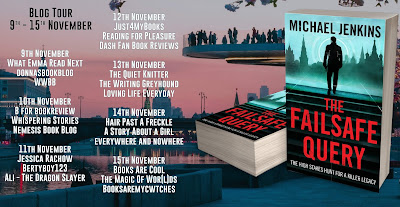 My thanks to Michael Jenkins for joining me on my blog today and also Rachel @ Rachel’s Random Resources for my spot on the blog tour.

*Terms and Conditions –Worldwide entries welcome.  Please enter using the Rafflecopter box above.  The winner will be selected at random via Rafflecopter from all valid entries and will be notified by Twitter and/or email. If no response is received within 7 days then I reserve the right to select an alternative winner. Open to all entrants aged 18 or over.  Any personal data given as part of the competition entry is used for this purpose only and will not be shared with third parties, with the exception of the winners’ information. This will passed to the giveaway organiser and used only for fulfilment of the prize, after which time I will delete the data.  I am not responsible for despatch or delivery of the prize.

Posted by Reading for Pleasure at 19:29