Today I am pleased to be able to participate in the blog tour for The Green Viper by Rob Sinclair.  My thanks go to Emma Welton and Bloodhound Books for my spot on the tour, along with Rob for allowing me to read a copy of his book. 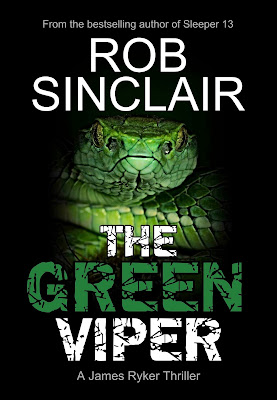 I need your help. Call me.

Ex-intelligence agent James Ryker receives a coded message through a secret drop point, a means of communication known only to him and one other person. The problem is, that person is his ex-boss, Mackie... and he’s already dead.

But the cry for help is real, and it’s a request Ryker can’t refuse.

Travelling to New York alone and without official sanction, Ryker has a single goal in mind, yet even he couldn’t have bargained for the violent world he’s soon embroiled in. Caught in the middle of a spiraling chaos, with the FBI on one side and warring underworld bosses on the other, Ryker must put all of his skills to the test in order to come out on top and keep his word.

In a world full of lies and deceit, loyalty is everything, and it’s time for James Ryker to pay his dues.

Green Viper is the next thrilling instalment in the Ryker series.

This book centres around the return of Ryker following a cry for help note left in one of Ryker’s safe places which only Ryker and Mackie knew about.  Ryker knows is can’t be Mackie as he died so who can it be and what does this person want with Ryker?  Especially as he’s a civilian and no longer with the JIA.

We join Ryker as he travels to New York to help somebody very close to Mackie, someone who Ryker has known since he was  a child, Mackie’s son, Scott Campbell.   We follow Ryker as he goes about sorting out a small problem, who am I kidding, no problem is ever small that Ryker gets involved in!

Ryker becomes embroiled in the complicated world of narcotics and ends up also having to deal with the FBI as well, however in usual Ryker style we can expect him to make friends with one of them to sort the situation out, with lots of twists, turns along with the usual scenes of destruction that he brings to his way of dealing with things.

This was a great read and I am so pleased Ryker is back.  We all need a bit of Ryker in our lives.

Rob is the author of the critically acclaimed and bestselling Enemy series and James Ryker series of espionage thrillers. His books have sold over half a million copies to date with many reviewers and readers having likened Rob's work to authors at the very top of the genre, including Lee Child and Vince Flynn.

Rob began writing in 2009 following a promise to his wife, an avid reader, that he could pen a ‘can’t put down’ thriller. He worked for nearly 13 years for a global accounting firm after graduating from The University of Nottingham in 2002, specialising in forensic fraud investigations at both national and international levels. Rob now writes full time.

Originally from the North East of England, Rob has lived and worked in a number of fast paced cities, including New York, and is now settled in the West Midlands with his wife and young sons 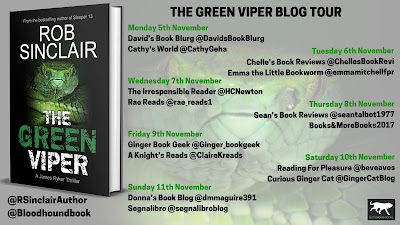 My thanks to Rob Sinclair, the publishers Bloodhound Books and also Emma @ DamppebblesBlog Tours for my spot on the blog tour.
Posted by Reading for Pleasure at 18:44