Today I am pleased to be able to participate in the blog tour for The Repenting Serpent by Wes Markin.  My thanks go to Caroline Vincent at Bits about Books .

A vicious serial killer slithers from the darkness, determined to resurrect the ways of a long-dead civilisation.

When the ex-wife of one of DCI Michael Yorke’s closest allies is left mutilated and murdered, Yorke and his team embark on their greatest test yet. A  deeply personal case that will push them to their very limits.

As Yorke’s team are pulled further into the dark, the killer circles, preparing to strike again.

The Repenting Serpent is a true edge-of-the-seat, nail-biting page turner.

Today on my blog I have a sneaky extract from the book for you to sit back, relax and enjoy. The cover airs mystery and looks very inviting to me. 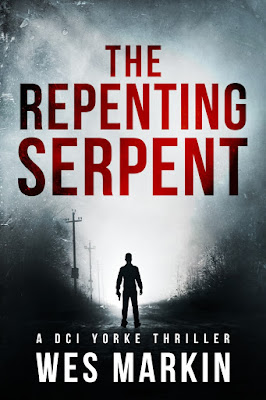 WITH A TUMBLER of whisky in one hand, and a photo of his dead sister in the other, he stared across the living room at the locked drawer he hid from the world.
He sighed, leaned back on the sofa and let the spirit burn his throat.
He took another look at the sister he’d so admired as a child, who in turn, had rarely acknowledged his own existence. He noticed the lines around her eyes which would now never deepen, and the dark hair that would never grey. He remembered his failed promise to her. And thought of her killer walking free.
After replacing her photograph in the drawer with other memorabilia of his personal failings, including a faded photograph of Charlotte, his first love, he locked it and buried the key behind the clock on his mantelpiece.
Despite ending his secretive act, Yorke still flinched when he heard his bedroom door open. He turned to acknowledge Patricia Wileman, his girlfriend of over two years now, standing there in a white-cotton nightie. They exchanged a smile, and as he opened his mouth to reassure her that he was on his way back to her, the mobile phone in his dressing-gown pocket rang.
As he took the call, and listened to the unthinkable, he stared at Patricia. Even in this darkened hour, metres away, he knew she would see the horror in his eyes. She started across the room, knowing that when the call ended, she would need to be there for him.
As he murmured his farewells, she embraced him.
It was unusual for a man as experienced as DCI Michael Yorke to be so affected by evil, but when evil journeyed so close to home, as it had done tonight, no one was exempt.
He sagged in Patricia’s arms.
* * *
DS Jake Pettman stroked one of the dead pigeon’s broken wings. He then replaced the lid on the shoebox, finished his third bottle of Summer Lightning beer, and replaced the bird underneath the sink.
It was the third such delivery in three years, and rather than contact the station immediately, as Jake had done on the previous two occasions, he’d decided to keep this one all to himself.
Two days on from the delivery, and he was no closer to explaining his reasons behind doing this. Not that this was a problem. He was the only one who knew about it. After peering in at his sleeping wife, Sheila, who was currently snuggled up with their two-year-old son, Frank, he returned to the kitchen, and the letter which had accompanied the shoebox lying by the sink.
Jakey … how does it feel to not be able to fly anymore?
Love Lacey x
His phone rang. Even before he answered it, he sensed he was going to hear something that was going to turn his entire world upside down and make a dead bird in a box the least of his worries.
* * *
After taking the phone call, DI Emma Gardner wanted to cry. Instead, she went right into her daughter, Anabelle’s room, and held her close. The young girl woke and murmured something. Gardner felt momentarily reassured. She kissed her daughter on her head and laid her back down.
She then took a deep breath, said goodbye to her husband, threw a handful of tictac’s into her mouth, and left, beginning what felt ominously like a journey to hell.
* * *
When Yorke arrived at DS Iain Brooke’s large cottage, pushed back into the Salisbury Plains, he stepped from the car and was immediately confronted by Gardner.
‘Sir, I …’ She stopped and started to cry.
Yorke reached out and held her cheek. He held it for a couple of seconds, made eye contact with her, and then embraced her.
‘Pathetic, I’m sorry,’ she said from his shoulder.
‘That’s ridiculous, Emma.’
She stepped out of the embrace, rubbed tears away and said, ‘I’ll hold it together, sir.’
‘I know you will,’ Yorke said, reaching out to her cheek again. ‘That’s why this is yours.’
She widened her swollen eyes. ‘There’s no one better to manage this one. It’s your incident room.’
‘Sir?’
‘No one better.’
He turned to face the house. Gardner flanked him and Jake came up on the other side. He looked left and right at his two colleagues. Like him, neither were dressed appropriately for freezing weather. They had all left their homes with their minds reeling.
In the November darkness, under stars that looked grey and sick, Yorke surveyed the cottage he’d frequented on several occasions before to enjoy dinner with DS Iain Brookes and his wife, Jessica. Tonight, sheltering death from the cold, it looked far from welcoming. In fact, the two glowing windows on either side of the front door looked like the eyes of a preying animal.

Wes Markin is a hyperactive English teacher, who loves writing crime fiction with a twist of the macabre.

Having finished 'The Repenting Serpent,' sequel to 'One Last Prayer for the Rays,' he is now working on the third instalment of DCI Michael Yorke's wild ride. He is also the author of 'Defined,' a prequel to his DCI Yorke novels, which takes the reader back to his blood-soaked university days. 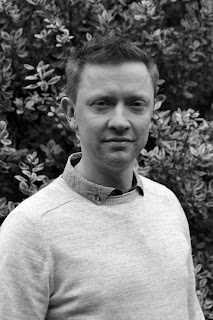 Born in 1978, Wes grew up in Manchester, UK. After graduating from Leeds University, he spent fifteen years as a teacher of English, and has taught in Thailand, Malaysia and China. Now as a teacher, writer, husband and father, he is currently living in Harrogate, UK.

Book 1 - One Last Prayer for the Rays

To review The Repenting Serpent just follow these links: 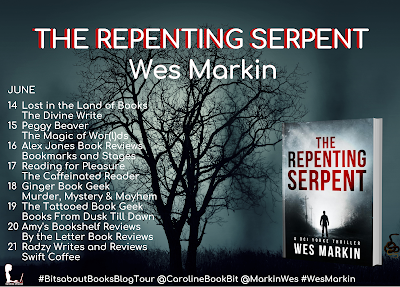 My thanks to Wes Markin for providing this excerpt and also Caroline @ Bits about Books for my spot on the blog tour.
Posted by Reading for Pleasure at 18:28