Today I am pleased to be able to host the cover reveal for #TheChosenOnes by Carol Wyer and publishers Bookouture.

This is the fifth book in the brilliant Detective Robyn Carter series and the order of the books is as follows: -

1. Little Girl Lost
2. Secrets of the Dead
3. The Missing Girls
4. The Silent Children
5. The Chosen Ones


They had not been forgiven. And they would never be forgotten ….

When a doting young father is murdered and his body discovered in a cornfield for his family to see, it’s a harrowing new case for Detective Robyn Carter. But just as Robyn starts to investigate, a popular local doctor and young mother, is found dead outside her surgery.

As Robyn tries to find the link between the victims, she uncovers a dark web of secrets. Were these much-loved members of the community as innocent as they seemed?

The killer has a message for Robyn and the carefully chosen victims. Can Robyn get to the truth before she becomes the next target?

Carol Wyer is the author of gripping bestseller Little Girl Lost, the first in the Detective Robyn Carter series that has earned her acclaim as a crime fiction writer. Rights to the book have been taken up in several countries including: Poland, Israel, Slovakia, Czech Republic, Hungary, and Norway.

There are six further books in the series with The Secrets of the Dead, The Missing Girls and The Silent Children also released in 2017 and two further books due in 2018.

To connect with the author and found out more you can click on the following: -

To pre-order your copy of #TheChosenOnes to be delivered to your kindle on 24 May 2018 click below. 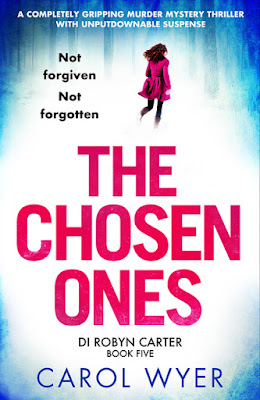 Go and click and pre-order, you know you want to!


Posted by Reading for Pleasure at 20:10