This is the second book I have read by M Jonathan Lee, the first being Broken Branches and you can read my review of that here.

I would describe Drift Stumble Fall as being so poignant and one that even after I have finished reading has stayed with me.  I finished this a good few weeks ago and can still vividly remember the story and the effect it had on me whilst reading the same. 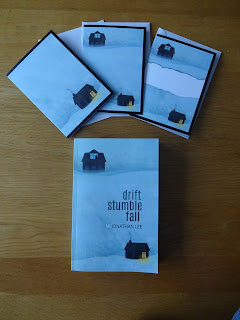 Richard feels trapped in his hectic life of commitment and responsibility. From the daily mayhem of having young children, an exhausted wife and pushy in-laws who frequently outstay their welcome, Richards existence fills him with panic and resentment. The only place he can escape the dark cloud descending upon him is the bathroom, where he hides for hours on end, door locked, wondering how on earth he can escape.

Often staring out of his window, Richard enviously observes the tranquil life of Bill, his neighbour living in the bungalow across the road. From the outside, Bills world appears filled with comfort and peace. Yet underneath the apparent domestic bliss of both lives are lies, secrets, imperfections, sadness and suffering far greater than either could have imagined. Beneath the surface, a family tragedy has left Bill frozen in time and unable to move on. As he waits for a daughter who may never return, Bill watches Richards bustling family life and yearns for the joy it brings. As the two men watch each other from afar, it soon becomes apparent that other people’s lives are not always what they seem. 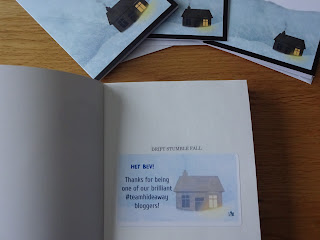 We follow two families who live opposite each other. We meet Richard Brown who feels trapped in the life he has with his wife and two young children, who watches a couple across the road who feel have more peaceful and tranquil than him.

Little does he realise that the man over the road Bill and his wife Rosie have problems of their own and Bill is jealous of Richard’s family life which to him looks picture perfect. Both families get snowed in, Richard ending up with his in-laws stopping with him, which makes him even more determined to try and escape from what he feeds is his boring mundane life.

Bill and Rosie have their own private lives and we are given insight into how what has happened has affected them both.

This book is so poignant and had me staring out of the tram window on my commute to work thinking long and hard about people’s appearances and how what looks to be a perfect life on the outside can be such a troubling life on the inside and behind closed doors.

M. Jonathan Lee deals so effectively on the subject of mental health and many of the issues that were dealt with I could relate to either personally or have physical understanding of how this affects people.

This is the second book I have read by M. Jonathan Lee and each book has stayed with me long after I have finished the same.

M Jonathan Lee is a Yorkshire-based author and mental health awareness campaigner. He began writing seriously in 2006, shortly after the suicide of his brother, Simon, and his own struggle with anxiety and depression. It took nearly five years for Jonathan to write his first novel, The Radio - a black- comedy which deals with suicide which was shortlisted for the Novel Prize 2012 (for unpublished authors) and subsequently published in 2013.

Jonathan campaigns tirelessly to remove the stigma associated with mental health problems and works closely with various mental health charities including Mind, Time to Change and Rethink, frequently blogs for the Huffington Post and is a regular guest on BBC Radio Sheffield talking about mental health. He regularly speaks in local schools and colleges on writing and mental health and is currently spearheading a local outreach project in which local churches provide assistance to those affected by anxiety and depression. Before writing full-time, Jonathan held a senior position in a FTSE100 company. He lives in Barnsley, Yorkshire, with his second wife, five children, two cats and a dog.

In 2016, he signed for boutique publishers, Hideaway Fall and his fourth novel Broken Branches was released in July 2017, winning book of the month in Candis magazine for September.
He has recently written for the Big Issue and spoken at length about his own personal struggle on the BBC and Radio Talk Europe.

To connect with M Jonathan Lee click on the links below

Link to buy the book

Thanks to the author and publisher Hideaway Falls for my review copy. This is my honest and unbiased opinion.