Today I am pleased to be able to participate in the blog tour for The Picture, When Greed Turns Deadly by Roger Bray.  My thanks go to Rachel at Rachel’s Random Resources. 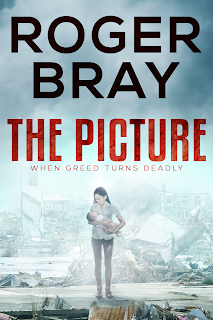 A warehouse in Japan used as an emergency shelter in the aftermath of the 2011 Tsunami. A distraught, young Japanese woman in dishevelled clothes sits on a box, holding her infant daughter. Ben, a US rescue volunteer, kneels in front of her offering comfort. They hug, the baby between them. The moment turns into an hour as the woman sobs into his shoulder; mourning the loss of her husband, her home, the life she knew. A picture is taken, capturing the moment. It becomes a symbol; of help freely given and of the hope of the survivors. The faces in the picture cannot be recognised, and that is how Ben likes it. No celebrity, thanks not required.

But others believe that being identified as the person in the picture is their path to fame and fortune. Ben stands, unknowingly, in their way, but nothing a contract killing cannot fix.

Context:  Ben Davis a retired Portland, Oregon police officer volunteers in the relief effort to the areas devastated be the 2011 Japanese Tsunami. He meets a young Japanese woman cradling her baby and a picture is taken of them which becomes an iconic emblem of the disaster.  A conman, Vince Brown, decides to pretend he is the man in the picture to star in a reality TV show focusing on natural disasters.  He realises that his connection to the picture could be his undoing if the truth were to come out.  As the idea of a reality TV show comes closes the TV executives want some reassurances.

“That’s you, though, isn’t it, Vince?” the small-town, talk show host had asked.

Charkwood had hardly left Vince alone after his revelation in the sports bar, had bought him a couple of drinks, then a couple more, and would have dragged him off to the studio then and there if it hadn’t been late and Vince had the common sense to hold back.

The excitement of Charkwood gave Vince some indication of how this could go down, he was suddenly like he had found his new best friend or a rediscovered old best friend. Either way, Vince was not going to trust this guy. In his view reporters or anyone in the news business couldn’t be trusted. And someone like Charkwood, desperate to get out of this one-horse hicksville, would sell the soul of his firstborn for the chance, he would sell the story of Vince the man in the picture or Vince the conman as easily.

Vince had grabbed a business card and giving a promise to make the call as he left, he returned to his motel, first to sleep off the beers he had drunk and then to find out all he could about the picture.

Once he felt sure enough of himself to pass it off, he had made the call which had found him in the chair opposite the talk show host and contemplating the question.

“Well, I was there, and I found myself in a lot of situations where I was offering comfort to refugees, I remember hugging a girl, with her baby. I don’t remember the picture being taken though, I must admit.”

And there it was, a statement, not a question. He didn’t have to confirm or deny what they were saying, and it made him look all the more modest and the modesty came across as his reluctance to claim credit for what was a group effort.

Vince had been sitting in a bar in Vegas on the day the photo was taken, he had been rather pleased with himself he’d put it all on black and had come out well ahead. His only concern that day was if he should hang around and try to link up with the chick from last night or try a different casino for new tables and new women. Play half and stash half even if he lost the play money he’d still be thirty grand up and flashing the cash always attracted the ladies.

One thing he certainly knew nothing about was what was happening on the other side of the Pacific and if he had have known, he wouldn’t have cared.

Vince had observed the cultural obsession with celebrity in the same way Ben had, but had come to a different conclusion. He didn’t so much despise it as laugh at the inadequacies of the participants, desperately selling themselves to keep their place in the ever-moving spotlight. He was more realistic and pragmatic though and acknowledged the money-making potential of it.

It didn’t matter who they were.  Whether it was some fat kid with a clinically obese mother, or women who claimed fame because they had had sex with someone and had a video of the event ‘leaked’ to the Internet, or because they had bucket loads of cash thrown at them through reality TV and assumed that rich equaled talent.  They all demanded a respect that none of them deserved. It didn’t matter to Vince; they were all making money. He could see the ghoulish fascination cable audiences had with people he believed were a drain on the gene pool and oxygen thieves of the first order and he didn’t think of himself as a hypocrite at all.

These poor saps, with their pathetic lives and even more pathetic grab at fame and their increasingly dramatic antics to hang on to it at any cost, actually considered themselves to be important while most people, well anyone with an IQ higher than a lemon, considered them ridiculous.

Vince knew he had to be cleverer than that and he was going to be playing the system for all it was worth and for that reason, he wasn’t seeking the spotlight, not yet.

In his flights of fantasy Vince could actually see a cable show coming out of this, Vince Brown the savior of communities. Swooping in with his band of visually pleasing helpers to put out fires, or rebuild communities after a devastating event.

Of course, Vince had no intention of getting his hands dirty putting out or rebuilding anything, but the editing would certainly show him to be at the center of the action, directing his crew of nubile girls and the occasional over-muscled hunk, all dressed inappropriately for relief work, but appropriate for the ratings, especially in the fifteen to forty male demographic.

Unfortunately, he couldn’t arrange a spectacular natural disaster every week, but there was always something going on, floods or fire, snow storms and tornadoes. As long as he could get footage of himself suitably somber, hugging some desolate creature with a backdrop of destruction he’d be happy because that, he was convinced, would be ratings gold.

I have always loved writing; putting words onto a page and bringing characters to life. I can almost feel myself becoming immersed into their lives, living with their fears and triumphs. Thus, my writing process becomes an endless series of questions. What would she or he do, how would they react, is this in keeping with their character? Strange as it sounds, I don’t like leaving characters in cliffhanging situations without giving them an ending, whichever way it develops.

My life to date is what compels me to seek a just outcome, the good will overcome and the bad will be punished. More though, I tend to see my characters as everyday people in extraordinary circumstances, but in which we may all find our selves if the planets align wrongly or for whatever reason you might consider.

Of course, most novels are autobiographical in some way. You must draw on your own experiences of life and from events you have experienced to get the inspiration. My life has been an endless adventure. Serving in the Navy, fighting in wars, serving as a Police officer and the experiences each one of those have brought have all drawn me to this point, but it was a downside to my police service that was the catalyst for my writing.

Medically retired after being seriously injured while protecting a woman in a domestic violence situation I then experienced the other side of life. Depression and rejection. Giving truth to the oft said saying that when one door closes another opens I pulled myself up and enrolled in college gaining bachelor and master degrees, for my own development rather than any professional need. The process of learning, of getting words down onto the page again relit my passion for writing in a way that I hadn’t felt since high school.

So here we are, two books published and another on track.

Where it will take me I have no idea but I am going to enjoy getting there and if my writing can bring some small pleasure into people’s lives along the way, then I consider that I will have succeeded in life. 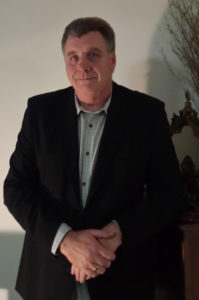 My thanks to Roger Bray for providing this excerpt, and Rachel @ Rachel’sRandom Resources for my spot on the blog tour.