Today on my blog, I'm reviewing the second book by Daniel Cole called Hangman.  This is a continuation of the book Ragdoll and follows on 18 months later.  You can read my review of Hangman here. 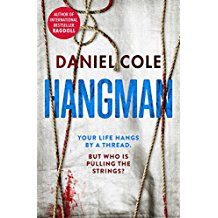 He currently lives in sunny Bournemouth and can usually be found down the beach when he ought to be writing book two instead.


18 months after the 'Ragdoll' murders, a body is found hanging from Brooklyn Bridge, the word 'BAIT' carved into the chest.
In London a copycat killer strikes, branded with the word 'PUPPET', forcing DCI Emily Baxter into an uneasy partnership with the detectives on the case, Special Agents Rouche and Curtis.
Each time they trace a suspect, the killer is one step ahead. With the body count rising on both sides of the Atlantic, can they learn to trust each other and identify who is holding the strings before it is too late?

Hangman is the second book in the Detective William Fawkes series and follows on from Ragdoll but 18 months down the line.

Wolf is AWOL and DCI Emily Baxter is called to investigate what appears to be what they i.e. US Special Agent Elliot of the FBI and a CIA Agent Damien Rouche are calling a copycat murder along the lines of the Ragdoll Murders whose scars and turmoil are still lingering.

This copycat murder is on the other side of the world, however the victim has a familiar name and also has the word BAIT carved deep within the chest area.  More murders happen but these have the word PUPPET carved in the chest area.

What is the connection between these two words?

We are taken across both sides of the Atlantic as murders are taking place along similar lines with carvings happening to each victim.

I found this book an interesting read but not as good as the first book. It took me a while to get used to other characters in the book and also felt like it took a while to start to flow and become interesting, however by the time I had finished the book I could see why it had been done as it had.

I am now looking forward to the 3rd part of this book and hopefully the return of Fawkes.

At 33 years old, Daniel Cole has worked as a paramedic, an RSPCA officer and most recently for the RNLI, driven by an intrinsic need to save people or perhaps just a guilty conscience about the number of characters he kills off in his writing.

My thanks to NetGalley for granting my wishes to review this book.  My thanks go to them.