Today I am pleased to be able to participate in the blog tour for Never Be Broken by Sarah Hilary.  My thanks go to Anne Cater from Random Things Tours for my spot on the tour. 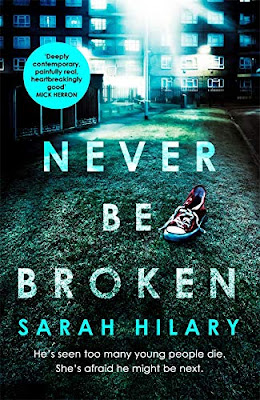 Children are dying on London's streets. Frankie Reece, stabbed through the heart, outside a corner shop. Others recruited from care homes, picked up and exploited; passed like gifts between gangs. They are London's lost.

Then Raphaela Belsham is killed. She's thirteen years old, her father is a man of influence, from a smart part of town. And she's white. Suddenly, the establishment is taking notice.

DS Noah Jake is determined to handle Raphaela's case and Frankie's too. But he's facing his own turmoil, and it's becoming an obsession. DI Marnie Rome is worried, and she needs Noah on side. Because more children are disappearing, more are being killed by the day and the swelling tide of violence needs to be stemmed before it's too late.

NEVER BE BROKEN is a stunning, intelligent and gripping novel which explores how the act of witness alters us and reveals what lies beneath the veneer of a glittering city.

Today I am one of the last stops on the blog tour and have a review for you.

Now this is the second book I have read by Sarah Hilary and even though this is the book after Come and Find Me which is book 6 in the series, I do feel that to fully understand some of the events in Never Be Broken you do need to read the previous book.

My thoughts on starting this book was no that can’t happen and why on earth has what happened happened in the opening chapter. Why would the author Sarah Hilary do that in the first few pages?

After that opening chapter, the book then continues and we are drawn into the world of knife crime, and the London high rise estates and streets where gangs seem to frequent.  Now if you think this is going to be a book about London gangs you would be wrong.  We are drawn into some of the ways in which the gangs deal with things.  However this book is about the “rich kids” as they are sometimes known who are drawn into the estate on the premise of hearing stories and life tales from the residents that have lived in the tower blocks for a number of years if not all their lives.  We are involved in Marnie and her team having to solve the unexplainable death of one of these kids.

I was thoroughly gripped with this book and couldn’t wait to pick it up to continue reading.

Now to await the next book and whilst I am doing that hopefully start the other books to catch up.

My thanks go to Anne Cater at Random Things Tour for my spot on the tour, secondly to Sarah Hilary for writing such a fantastic book. The review is however my honest unbiased opinions.

Sarah Hilary’s debut, Someone Else’s Skin, won Theakstons Crime Novel of the Year 2015 and was a World Book Night selection for 2016.  The Observer’s Book of the Month (‘superbly disturbing’) and a Richard & Judy Book Club bestseller, it has been published worldwide. No Other Darkness, the second in the series was shortlisted for a Barry Award in the US.  Her DI Marnie Rome series continued with Tastes Like Fear, Quieter Than Killing and Come And Find Me. Follow her on twitter @sarah_hilary. 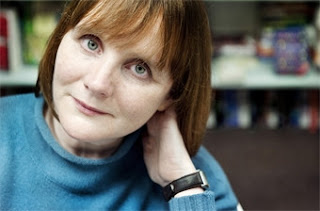 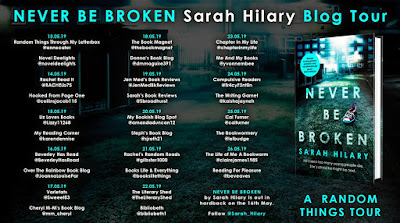 My thanks to Anne Cater at Random Things Tours for my spot on the blog tour.

Because of You - Hélene Fermont #BlogTour #Extract

Today I am pleased to be able to participate in the blog tour for Because of You by Hélene Fermont.  My thanks go to Sarah Hardy at Books on the BrightSide. 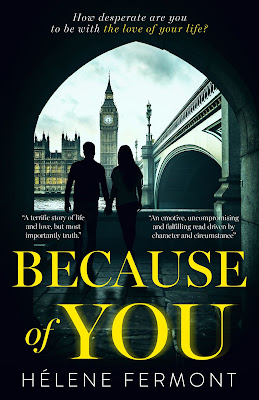 How desperate are you to get the one you love?

When Hannah and Ben meet at a friend's party, he knows she's The One. But Hannah's in an intense relationship with Mark and planning to return to her native Sweden to embark on a teaching career.

Desperate to make Ben fall in love with her, rich spoilt heiress Vanessa sets in motion a devious string of events that ultimately changes the course of four people's lives indefinitely.

Hannah is the love of Ben's life, yet Vanessa will stop at nothing to claim the man she is convinced is her destiny.

Because of You is a dark, morally complex and cross-generational story of enduring love, fate and destiny.

Now before you settle down and read this lovely extract from Because of You, I insist that you make sure you are sitting comfortable and have a drink to hand, as I have a feeling that once you have read this you will want to buy the book and start all over again.

Chatting to some passers-by outside, she suddenly heard someone ask, “I never noticed you until tonight . . . What’s your name?”

Turning to see who it was, Hannah’s face turned red.

Holding onto her boyfriend’s jacket sleeve, eyes narrowing, the tall girl cooed, “Mark, honey, let’s go back to my flat. We’ve got the place to ourselves.”

But Mark cut loose from her grip. “You’d better make the most of it. I made other plans.”

“But I was under the impression . . .” Her voice faltered.

“We’re not joined at the hip!” The muscle in Mark’s cheek twitched furiously as he abruptly left the girl too upset to respond and stalked off in the opposite direction. Oblivious to the destruction left in his wake, Mark approached Hannah.

“What’s someone as beautiful as you doing in a dump like that?” he asked, his eyes flicking momentarily back to the disco.

“My friends and I meet up every Friday. If it’s not to your liking, I suggest you don’t return.” She’d had enough of his rude behaviour. Who did he think he was and how dare he chat her up in front of his girlfriend? Ignoring his stare, Hannah joined her friends further down the pavement.

“What did he say to you?” Sanna asked in a contemptuous voice, the others following suit. “You’re looking upset!”

“I’ve never met anyone as arrogant. I bet he thinks he’s God’s gift to women!” Livid that he’d treated Denise in such a demeaning way, Hannah couldn’t care less if he overheard her.

But Mark was much too busy watching the girl with her green eyes blazing at him, equally fiery-red hair and curvaceous figure.

I can’t wait to see her again! Mark Copeck was used to getting what he wanted, and Hannah Stein was just that.

Catching a passing cab, John, Sanna and Rosie dropped Hannah off outside Ella’s house. It was almost 3am. Opening the door to let her out, John stifled a yawn. “Listen to Uncle John’s advice: Copeck’s in a league of his own. He takes great pleasure in hurting anyone who gets too close to him. You’re the only woman putting him in his place.”

“Good! It serves him right. How come you’re so concerned?”

“Call it sixth sense. Most women are duped by his charm, but as soon as he gets what he wants, he dumps them – Denise is a prime example. I don’t want you to get hurt,” he said, kissing her cheek.

“Give her some credit,” said Rosie, eavesdropping on their conversation. “Hannah’s much too clever to fall for that jerk!”

Meeting her gaze, John shook his head. “It’s her heart, not brain, I worry about.”

Ignoring their comments, Hannah bid them goodnight, waving until the cab was out of sight. Half an hour later, curled up in bed and looking back on the night’s events, all she could think was she never encountered anyone like Mark. Was it possible to harbour feelings towards a complete stranger? Albeit a very arrogant one . . .

Against her better judgement, Mark stirred something inside of her. However hard she tried, she couldn’t stop recalling how it felt when his eyes looked into hers.

Hélene Fermont writes character-driven psychological crime fiction with a Scandi Noir flavour. Known for her explosive, pacy narrative and storylines, she has published three novels – Because of You, We Never Said Goodbye and His Guilty Secret – and two short story collections – The Love of Her Life and Who’s Sorry Now? Her fourth novel is due for release in the summer of 2019. After 20 years in London, Hélene recently returned to her native Sweden where she finds the unspoiled scenery and tranquillity a therapeutic boost for creativity. Enjoying a successful career as a Psychologist, when she’s not working her ‘day job’, Hélene spends her time writing, with friends and family, or playing with her beloved cat, Teddy. All three novels can be purchased via her website helenefermont.com/books/ 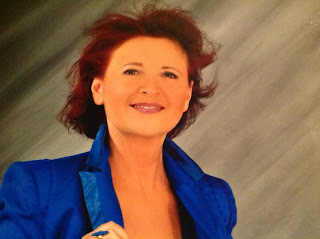 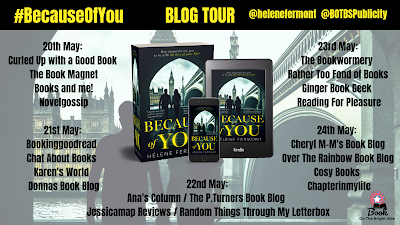 My thanks to Hélene Fermont for joining me on my blog and providing this excerpt from Because of You and also Sarah Hardy @ Books on the BrightSide for my spot on the blog tour.