Death in the Woods, B A Steadman #Extract #BlogTour #BloodhoundBooks

Death in the Woods

Today I am pleased to be able to participate in the blog tour for Death in the Woods by B A Steadman.  My thanks go to Sarah Hardy and Bloodhound Books. 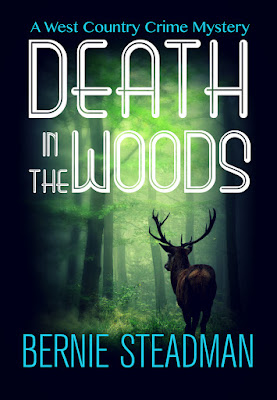 Meet Detective Inspector Dan Hellier, a man who needs to redeem his career and catch a killer.

Soon after DI Hellier returns home to Exeter under a cloud, the body of a talented young singer is found in the woods.
When her death reveals links to the boss of a recording studio, a predatory gang and a school music teacher, Hellier knows he has his work cut out.
Before any more innocent people are put in danger, Hellier will need to untangle the web of lies and work out which of many suspects are guilty of murder. But can he solve the case in time?

Today on my blog, I have a sneaky peek from Chapter 1 of the Death in the Woods book by B A Steadman.  Grab a drink, a comfy chair and settle down to have a read.  I have and it sounds great.

Date: Sunday 23rd April  Time: 01:47  East Devon
The driver flicks off the headlights, killing the puddle of light. He puts the vehicle into neutral and lets it coast to a stop at the kerb.
Two men get out of the vehicle, leaving their doors open, and move to the rear, pressing their hands against the cold metal of the rear doors as they twist the handles. A girl lies curled amongst the detritus in the back of the vehicle, her white skin reflecting the silver sliver of a spring moon. The taller man picks her up, cradling her head, and follows the smaller figure through the trampled green netting into the stand of bent and beaten pine trees.
He places the girl carefully behind a fallen log and the other man covers her with a leafy branch he tears from a tree.
Back at the vehicle, the smaller man notices the girl’s shoe, a flat, black ballerina slipper lying in the mud on the side of the road. He retrieves it, folds it in half and thrusts it into his hoodie pocket. ‘She’ll be safe there for a little while,’ he whispers. The other man does not reply, but wipes sweat from his face with the bottom of his tee shirt.
Starting the engine, they creep forward, only switching on the headlights as they turn onto the main road.
Hours later, a shaft of early sunlight like the beam of a lazy torch searches the patch of pine trees. It passes over golden highlights in a curl of dark hair half-buried in a nest of needles and cones. A bird sings in the still of the morning. A black-eyed magpie sidles over and makes a tentative stab at the onyx and silver ring on the girl’s finger. Her face turned into the bed of pine needles, the girl lies on her side under the broken branch, as if simply asleep.
‘Gi’s a fag, then, Parker.’ Lee Bateson leapt onto Parker’s back and grappled him to the ground, pummelling at his head.
Joey Parker squirmed out from underneath in a tangle of skinny legs and arms. ‘Gerroff me. I haven’t got any smokes, so...’ He swung an arm back and grabbed Bateson by the tie, throttling him while the other boy floundered, gasping and wriggling to get free.
‘Leave it out, lads,’ said a voice from the other side of the barbed wire fence.
Parker dropped Bateson and scuttled over to stand next to the bigger boy.
‘Just messin’, Ryan. Got any fags?’
‘Might ‘ave. Come on.’
Ryan Carr disappeared amongst the conifers of a small, dense wood fenced off at the top of the school field. The others dumped their bags and slipped after him through the broken fence, casting furtive glances towards the school buildings.
Joey Parker checked his phone as he followed. Not eight-thirty yet, just about time to cadge a smoke and get to registration before they were missed.
Carr waited by the clearing, kicking a dead crow with his boot. He fiddled about in his blazer pocket and fished out two cigarettes, passing one to Bateson and keeping one for himself. He slid a lighter from his sock and lit them.
Bateson shared a complicit smirk with Carr, who puffed in quiet contentment, then wandered off to sit on the fallen log dominating the small clearing. Carr went to sit, but stopped mid-movement, cigarette hanging from his bottom lip. He stared at a curl of hair peeking out from the side of the log.
Bateson trotted over.
‘What is it? Let me see,’ he said, words trailing a haze of smoke. He pushed past Carr and handed his cigarette to a grateful Parker. He moved closer, and flashed a look back at the other boys, eyes wide, as a he saw a magpie behind the log picking at something on the ground, its black beak stabbing. Bateson’s eyes narrowed to a single focus no more than six feet away. It was a ripped and shredded finger, and near it, the remains of an eye, hanging by who knew what, to a dark, empty socket.
Bateson stared, mesmerised by the whiteness of bone protruding from the bloodiness of flesh and the pinkness of the string attaching eyeball to socket and the shining silver ring the magpie was attempting to steal.
Closer now, Carr leapt backwards startling the magpie into a defiant caw as it flapped for the sky.
Dread gripped Lee Bateson. It was obvious now what would be under the branch. He knew. But he couldn’t stop himself. He had to look.
Behind him, Parker threw up the Weetabix he had consumed not an hour before.
‘No, it can’t be…’ Lee Bateson dragged the branch away, exposing the still and silent form of Carly Braithwaite.
Wow don’t know about you, but I’m itching to see what happens next and due to time constraintsI couldn’t review this book but I have added it to my never ending TBR list and really must push it up the list as soon as I can. 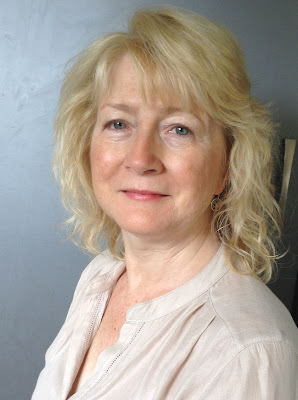 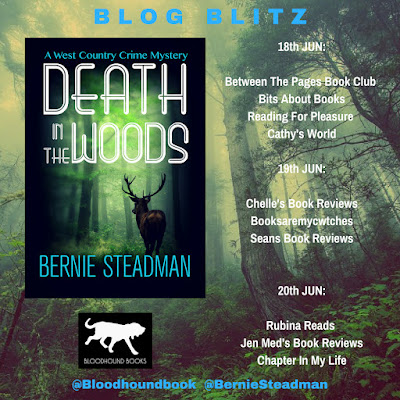 My thanks to B A Steadman for joining me on my blog today and sharing an extract from Chapter 1 of her book Death in the Woods, the publishers Bloodhound Books and also Sarah Hardy for my spot on the blog tour.