Today I am pleased to be able to participate in the blog tour for Deception Wears Many Faces by Maggie James.  My thanks go to Sarah Hardy and BloodhoundBooks. 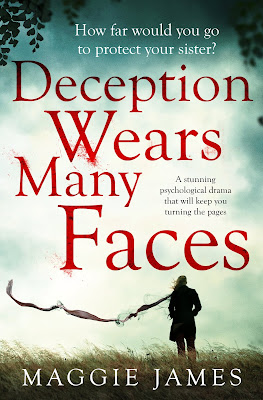 When Lyddie takes her sister to Devon to recover after a recent suicide attempt, it starts a train of events that will put their lives in grave danger.
Ellie has been the victim of a professional con artist, one who stole her savings, then disappeared from her life. Driven by her own history of failed relationships, Lyddie vows revenge on the man who broke her sister’s heart.
Soon she assumes a false identity and begins her hunt for a man she knows to be cold, calculating and ruthless. But who is fooling whom? And can Lyddie find the justice she seeks and heal her damaged sister?

Today on my blog, Maggie James joins me to share the story behind the book, make sure you are curled up comfortably in your favourite chair / seat and have your favourite drink with you.  It’s a beautiful guest post and such a riveting read.

The story behind Deception Wears Many Faces

Deception Wears Many Faces was such a fun book to write! The novel is linked with many happy memories, thanks to the fact I wrote it while backpacking through the Americas on a ten-month trip. My travels started in Canada and stretched as far south as the Antarctic Peninsula, taking in the USA, Mexico, El Salvador, Costa Rica, Panama, Colombia, Ecuador, Peru, Chile, Bolivia and Argentina along the way. I’ve been happily globe-trotting for decades, but almost all of my trips have been as a tourist. This one was my first as a nomadic novelist, and to combine writing with travelling was an utter joy. I wrote mostly in the mornings, reserving afternoons for exploring the local area, wherever that happened to be. Ah, the national parks of Utah - so beautiful!

Despite my penchant for wandering the world, Deception Wears Many Faces is based in my home city of Bristol, as are my other novels. Here’s a taster:

When Lyddie takes her sister to Devon to recover after a recent suicide attempt, it starts a train of events that will put their lives in grave danger.

Ellie has been the victim of a professional con artist, one who stole her savings, then disappeared from her life. Driven by her own history of failed relationships, Lyddie vows revenge on the man who broke her sister’s heart.

Soon she assumes a false identity and begins her hunt for a man she knows to be cold, calculating and ruthless. But who is fooling whom? And can Lyddie find the justice she seeks and heal her damaged sister?

So where did I get the idea for this story? The original concept for Deception Wears Many Faces came from a television documentary about con artists. The programme centred on people who had been the victims of fraud, but not the Bernie Madoff type of scam. Instead they’d suffered a betrayal much closer to home – all had been fleeced by a close friend or a family member. Many lost a considerable amount of money – some their entire savings. Every participant in the programme had suffered immense anguish, and it’s hard to imagine how they’ll ever trust anyone again.

Sounds incredible, doesn’t it? To those with a conscience, such behaviour is incomprehensible, especially when the guilty party displays no remorse. Sociopaths make great material for authors for that reason, and it’s one reason crime fiction is so popular. Who doesn’t love to see a villain get their comeuppance?

As I watched the programme, the idea for Deception Wears Many Faces pinged into my head. I wondered how the families of the victims of those who lost their savings must feel on their behalf. Angry, protective, hurt, no doubt. Worse if the perpetrator was never caught, or if the victim refused to involve the police. That got me thinking. What if a relative took matters into their own hands and sought revenge? Excitement pounded through me, and I knew I’d found the idea for my next book.

To write it, I’d need three main characters – the victim, her vengeful relative, and the con artist. Let’s start with Ellie Hunter, who attempts suicide after losing her life savings, along with her heart, to the man she’s been dating. What kind of woman might fall prey to a fraudster? I decided someone shy, lacking in self-esteem and easy to manipulate would suit my purposes. Ellie suffers from mental health issues and mild brain damage, but also harbours deep emotional scars from a traumatic past.

Like some of the people in the programme I watched, she is too ashamed to tell the police once she discovers she’s been defrauded, and little evidence exists anyway. Hence why her sister, Lyddie, decides to deliver retribution on Ellie’s behalf.

Next I considered what sort of man would make a successful career con artist. He’d need to be handsome, full of charm, and an expert at masking his true nature. Sociopathic and chameleon-like when it comes to reinventing himself for each woman he draws into his web of lies. I got excited about the prospect of creating a truly evil antagonist, a man devoid of conscience who enjoys sponging off gullible women – and who may possess a much darker side. Perhaps he’s even capable of murder - and so Steven Simmons was born.

That’s two characters created. Next came the protagonist, Lyddie Hunter. She’s a feisty, confident woman – a counterpoint to naive Ellie and her ruthless ex-boyfriend - yet driven by her own demons. One is her messy relationship history. Years ago, Lyddie fell prey to a skilled liar of a different kind, and the wounds are still raw. Her conviction she has failed as a sister to protect Ellie also plays a role. Once Lyddie embarks on her quest for justice, however, she finds that those who play with fire can get burned …

A fun task for me was determining how Lyddie plans to get revenge on Steven Simmons, and the obstacles she’ll face along the way. I can’t reveal too much without giving plot spoilers, but the last few chapters were a joy to write! Gutsy, go-getting Lyddie is now one of my favourite characters.

I like to give myself a different challenge with every novel. Deception Wears Many Faces is my first book told entirely from one character’s point of view, that of Lyddie Hunter. All my other novels employ two or three viewpoints, but with this one I wanted to try something different. To begin with, I found working with just one viewpoint restricting, and wasn’t sure whether to carry on with the book in that format. I’m glad I did, because writing this way proved a fascinating experience. Why? Because the reader sees the world through Lyddie’s eyes, but isn’t prone to self-deceit like our feisty protagonist. We can spot she’s heading for disaster, but we’re helpless to do more than watch. Her ability to deceive herself renders her vulnerable to the ruthless sociopath she’s pursuing. Maybe even to murder …

Deception Wears Many Faces is my sixth novel, published by Bloodhound Books on June 15, 2018. You can find out more about my books and check any special offers via my website: www.maggiejamesfiction.com.

Before turning her hand to writing, Maggie worked mainly as an accountant, with a diversion into practising as a nutritional therapist. Diet and health remain high on her list of interests, along with travel. Accountancy does not, but then it never did. The urge to pack a bag and go off travelling is always lurking in the background! When not writing, going to the gym, practising yoga or travelling, Maggie can be found seeking new four-legged friends to pet; animals are a lifelong love! 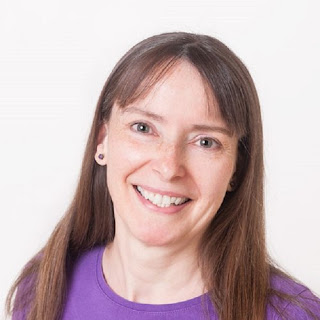 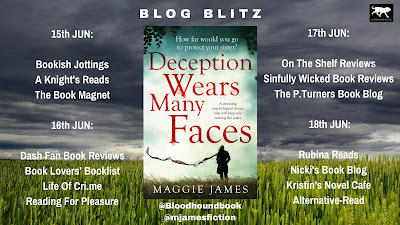 My thanks to Maggie James for joining me on my blog today and sharing the inspiration behind her book Deception Wears Many Faces, the publishers Bloodhound Books and also Sarah Hardy for my spot on the blog tour.