Today I am pleased to be able to participate in the blog tour for Blood List by Ali Carter.  My thanks go to Random Things Tours and Anne Cater for my spot on the tour. 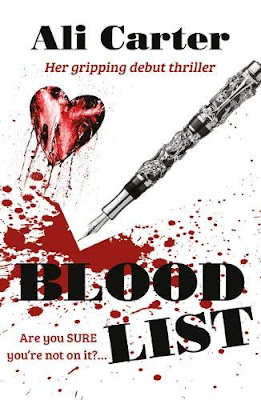 Think the Lake District is a lovely place to visit? Think again. A Psychological & Chilling Thriller set in and around the fictional town of Kirkdale in Cumbria. One by one the young women of Kirkdale are being found grotesquely murdered, with no clues as to why.

Lying between the great lake Kirkwater and the base of Kirkby Pike, although beautiful, Kirkdale isn't exactly the most exciting place on the planet. But after young reporter Jenny Flood moves into the relaxed Cumbrian town, it sets a catalogue of events in motion that brings this comfortable community to its knees.

When middle aged G.P. Charlotte Peterson discovers Jenny has followed her from Bradenthorpe, six years after a fling with her philandering doctor husband Miles, it stirs deeply buried mental health issues from her youth. In the run up to the Kirkdale country show, the arrival of this third and most recent adversary triggers the already edgy and emotionally scarred Charlotte into finally stepping over the edge. Her longing to destroy Jenny has been on a slow and very resentful burn for years, now the reality of achieving that presents itself as a genuine possibility.

Then there's the unexpected arrival of an American mystery woman. And just who is on the Blood List?

Today I have a lovely post from the author Ali Carter about how creating characters is key to the book!  Please grab a comfortable seat and a nice drink and settle down to read the lovely insight in what creating a character in a book is about.
Creating characters is the most important part of writing for me. Whilst the story has to be good, characters are absolutely key. I think if a story gets a bit thin in places, (although I’m not advocating that!), if the reader and I both love to love, love to hate, or love to feel sorry for my characters, then I’ll feel I’ve done my job. They need to be well rounded and believable with at least a few of what I call ‘The Six Haves - habits, hobbies, health issues, hang ups, heartaches and happiness. Also some of them will definitely be hiding secrets - that’s always the way with crime thrillers!

I often get asked how I created the characters in ‘Blood List,’ and if any of them are based on real people. The fact is that every character has a little of me in their makeup because I brought them to life, but they are mainly based on a mixture of lots of people I know. Most are within my close and extended family and friends, but I’ve even got inspiration from actors and celebrities to a certain extent. Some of my main characters are very firmly in my head as looking like particular actors, and/or some of their personalities from parts they’ve played as well. They have almost become them now. Most of my characters have a mixture of traits and personalities from various people whoever they may be, rather than being from one single person though.

Sometimes I may be watching a film or TV programme where something specific happens to a character or characters in the storyline and their reaction to it will set off ideas in my head, then I’ll have to grab my notebook before I forget and make sure I’ve got it down. I have a beautiful hand-made leather bound one my son bought me for Christmas and I keep it on my bedside table. When I wake up in the night with ideas for my characters’ storyline the light goes on and I start jotting. In fact the characters themselves will wake me up and tell me to put the light on and take down what’s happening to them. They can be very persistent!

‘Blood List’ is mainly set in a small town in The Lake District in Cumbria, with a connection to New York. The sequel I’m working on now, ‘Dead Girls Don’t Cry’ is mainly set in New York, but still has scenes in Cumbria. This means that some American characters who were only touched on in the first book, are now coming to the fore, but equally there are some from Cumbria too. There will be even more secrets uncovered, and from the pasts of the most unexpected people. This is one reason, certainly at the moment, why I have ended up with probably more characters than I imagine most authors would choose to have.

The main star of the show in ‘Blood List’ List is my antagonist, (not my protagonist), the psychotic Dr. Charlotte Peterson, who is betrayed once too many times by her philandering doctor husband Miles. She is cold, ruthless and takes no prisoners, on the plus side she loves her elderly patients – and her precious horses. (Everyone has a few good qualities...). My protagonist is crime thriller fan and sports columnist Andrew Gale. Andrew longs to be off the small stuff and promoted to crime reporter. This promotion finally happens when his boss breaks her ankle, but Andrew being Andrew, takes the investigative journaling a bit too far, including involving his self conscious and slightly anxious girlfriend Gina, (Charlotte’s surgery receptionist), and her feisty best friend, publican’s daughter Molly, who has the wickedest sense of humour. These two are like chalk and cheese which is why they probably get on so well.

Creating the bad guys is always more fun which is why Charlotte is the centrepiece. Having said that, I am a little in love with my Senior Investigating Officer, D.C.I., Harry Longbridge, who has been put out to grass by the Met. to complete the last five years of his service in a small town in Cumbria. He’s often tired and grouchy due to an un-diagnosed low blood sugar condition, so always eating barley cubes and sending his P.A. out for replacement bags. He doesn’t like interference, and having Andrew turning up at every crime scene for a story, (particularly due to his personal connection to the case), is driving him nuts. Plus his wife has never cooked a decent meal in their entire marriage so he’s living on fast food, bad for anyone but even worse for Harry’s health condition. However deep down (very deep!), he has a soft side - and a quick dry wit that makes me laugh all the time, (see . . ? They are real.)

So creating believable, credible characters is really important to me and I actually find it quite difficult not to have quite a few in order to build an enticing and realistic story. Interaction between them is so important too, the people they love and the people they hate, the people they feel sorry for and the ones they want to protect. After all, in real life that’s exactly how our own relationships and stories play out isn’t it? Only hopefully nobody actually gets murdered . . .

Wow thank you so much Ali for joining me on my blog today and sharing the wonderful insight in to how you create your characters.  I found that fascinating.   Can't wait to see what's next in store for some of the characters in the next book.  😊

Ali Carter was born in Surrey in 1958 and moved to East Anglia in 2003, settling just outside King’s Lynn 4 years later where she currently lives with her husband, 5 dogs and 6 cats. (Yes she knows the dog/cat thing is a bit mad!)

She originally found some success in writing poetry in the 80’s and 90’s, but inspiration for her debut novel ‘Blood List’ came after the Shipman case hit the headlines – a few years later the dark and deeply psychotic G.P. ‘Charlotte’ was born. The full story took its time in completion however as there was a very long period of writer’s block about three quarters of the way through the book. It was an author friend who finally persuaded her to pull it out of the laptop and finish it, for which she will be eternally grateful. At the time of writing, a sequel is in its infancy which she sincerely hopes won’t take another 12 years to come to fruition! 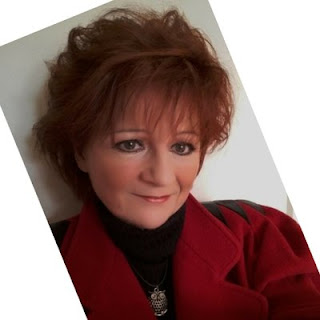 Ali is also a proud mum to two grown up sons, and an extra proud nanny to her adorable granddaughter, although at only 5 she won’t be reading ‘Blood List’ anytime soon!

My thanks to Ali Carter for joining me on my blog today and sharing a lovely insight into how she creates the characters that appear in her books.  My thanks also to Ann Cater at Random Things Tours for my spot on the blog tour.