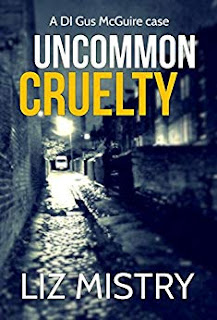 DI Gus McGuire and his team are called in to investigate the disappearance of a teenage boy after his parents return from a weekend away, to find their home trashed and their son missing. But that is just the beginning.

As the investigation unfolds, Gus must discover what links a violent bikers' gang, a Muslim youth group and a fundamentalist American based Christian church.

Alongside this, two cases from the past come back to haunt DI Gus McGuire and his DS, Alice Cooper.

Gus has a lot to juggle, but will he cope?

Uncommon Cruelty is the fourth in the DI Gus McGuire series set in Bradford, West Yorkshire and is a gritty, Northern Noir read.

Yet another fantastic book by Liz Mistry, full of fantastic twists and turns with every chapter.

We join Gus and the team as they start to investigate the murder of two young girls and the missing teenager Simon Proctor.  Is Simon connected to the murder or is his disappearance connected to something else.

Gus, Alice, Sampson, Compo and Taffy (the newbie) start to investigate the case.  We follow them as they conduct their investigations along with another murder, this time of a prostitute along with leaks to the press of the current investigation.  We also have the annoying DC Knowles who is determined to stoop to so many levels to destroy Alice.

I found this book such a riveting read and is definitely one of my favourites so far.  There was enough suspense to keep me tapping the pages of my kindle and despite some titbits that had me thinking I knew what was going to happen I still did the "OMG" on a couple of occasions when pieces of the jigsaw I was putting together didn't quite fit and I felt like I had to start some of it all over again.