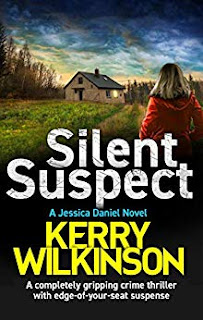 It started with a phone call. Just one word - ‘Jessica’ - and now Detective Inspector Jessica Daniel has a big problem.

Her missing friend, Bex, called from a battered seaside payphone and yet, by the time Jessica arrived, there was nobody there.

One man claims he can help – but then he turns up on a beach stabbed to death.

Jessica believes someone must be framing her. Someone who is always a step ahead. When she finds a boy whose tattoo matches Bex's, she becomes more desperate than ever for answers. But, with the police growing more suspicious, Jessica doesn’t have long to find Bex before she becomes the prime suspect for a murder.

With more than her career at stake, can Jessica clear her name - and find her friend - before it’s too late for them both?
My Review

I am so glad to see the return of Jessica Daniel in Silent Suspect, book 13 in the series.

This continues on from book 12, with the mystery surrounding the disappearance of Bex, and this time we find ourselves travelling with Jessica from her beloved home town of Manchester to the seaside town of Blackpool, which surprisingly enough I have good knowledge of having visited when I was younger and quite often visiting each year to see the illuminations and my parents now live not far from there as well.

Jessica is called to Blackpool by a mysterious telephone call by a voice saying her name and that’s all.  She traces this call to a phone box to Blackpool and off she goes to track Bex’s down.  As usual things don’t go according to plan nor how Jessica thinks or wants them to go and we follow Jessica on her mission to find Bex.

The book had the usual amount of intrigued and mystery in and was so lovely to be back reading all about Jessica and the search for Bex.  I felt I was back in the fold and part of the story.

Kerry Wilkinson has had No.1 crime bestsellers in the UK, Canada, South Africa and Singapore, as well as top-five books in Australia. He has also written two top-20 thrillers in the United States. His book, Ten Birthdays, won the RNA award for Young Adult Novel of the Year in 2018.

Originally from the county of Somerset, Kerry has spent far too long living in the north of England, picking up words like 'barm' and 'ginnel'.

When he's short of ideas, he rides his bike or bakes cakes. When he's not, he writes it all down.

Posted by Reading for Pleasure at 14:00