Something in the Water - Catherine Steadman #BlogTour #Review

Something in the Water

My thanks go to Ann Cater and Random Things Tours. 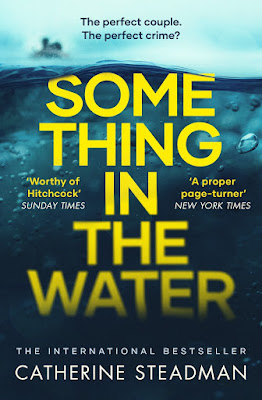 “Have you ever wondered how long it takes to dig a grave? Wonder no longer. It takes an age. However long you think it takes, double it…”

Erin is a documentary filmmaker on the brink of a professional breakthrough; Mark is a handsome investment banker with a bright future. They seem to have it all, until Mark loses his job and cracks start to appear in their perfect life. But they’re determined to make it work. They book their dream honeymoon and trust that things will work out – after all, they have each other.

On the tropical island of Bora Bora, Mark takes Erin scuba diving. Mark is with her – she knows he’ll keep her safe. Everything will be fine. Until they find something in the water…

Erin and Mark decide to keep their discovery a secret - after all, if no one else knows, who would be hurt? Their decision will trigger a devastating chain of events which will endanger everything they hold dear.

I cannot believe that this is a debut novel. The opening chapter made me wonder what had happened previously and then the story really begins. I mean when you read a first line like "“Have you ever wondered how long it takes to dig a grave? Wonder no longer. It takes an age. However long you think it takes, double it…” what on earth can you think is happening.

We meet Erin and Mark, a couple who are madly in love and planning the dream wedding and honeymoon. Thing seem to be perfect for the couple.

We follow Erin a film producer of documentaries who is filming for her current project which is going to be based around the lives of three criminals, all serving sentences in prison for different crimes and their release back into the community.

Whilst on honeymoon in what is described as the the idyllic island of Bora Bora things take an unexpected turn and the next stages of their honeymoon and married life are far from perfect.
This book was a pleasure to read and one I found myself immersed in on my commute to and from work, that immersed my husband felt the need to message me on a couple of occasions when we went our separate ways to our respective jobs to ask “Is that book good?”  On one occasion I nearly missed my stop on my journey home as my husband asked was I not getting off which meant I could have ended up in Leeds!

Catherine Steadman is an actress and writer based in North London. She has appeared in leading roles on British television as well as on stage in the West End, most recently in Agatha Christie’s Witness for the Prosecution in 2018. In 2016 she was nominated for Laurence Olivier Award for her performance in Oppenheimer. She is best known for her role as Mabel Lane Fox in Downton Abbey. She grew up in the New Forest and lives with a small dog and average sized man. Something in the Water is her first novel and her second is due for release in early 2020. 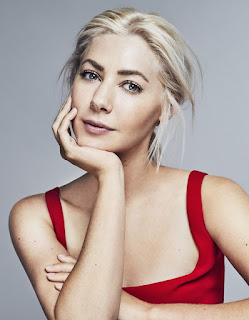 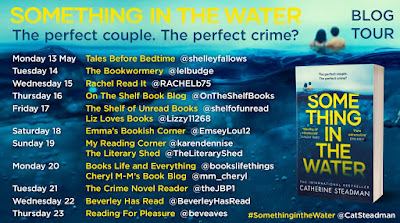