I am finally catching up with my reviews of the fabulous series from Liz Mistry and thought I would share my review from book 1 which is the first one I reviewed back in 2016!!  My reviews for the remaining DI McGuire books will follow over the next few days. 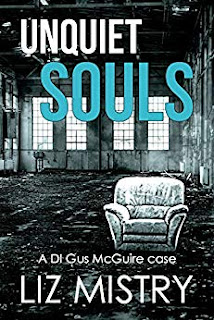 What is the link between the abduction of a little girl and a dead prostitute?

When the body of a prostitute is found, followed by the discovery of children locked in an attic, DI Gus McGuire is handed the case. But what at first appears to be a simple murder soon turns into an international manhunt for the members of a twisted child trafficking ring.

McGuire who is suffering with his own emotional problems, must pick his way through the web of deceit and uncover the truth in time before the body count rises.

Can McGuire identify The Matchmaker before it’s too late? And can he trust those he is working with?

Unquiet Souls is the first book in a dark and compelling new police series.

Unquiet Souls is set in alternating chapters over two specific years 2003 and 2015. It took me a while to realise why this is set out like this, however as the chapters progress it allows you to understand the series of events that happened, and what unfolded over the specific years. It had me hooked once I made the connection and wanting to read more.

Gus is a DCI who has been on sick leave following a previous incident, and now back on duty after finally been given the all clear. Back to where he belongs, dealing with a case of child trafficking, a case involving The Matchmaker, a case that opens wounds for some members of the police force.

This book has had me on a roller coaster of a ride, wondering who was behind this horrible child trafficking ring, thinking I'd figured it out to be shocked again. There were scenes in the book that gave me goosebumps and I seriously hope that they were fiction, because I would hate to think that this could/does happen.

Excellent book by Liz Mistry and I am seriously looking to read more by this author.

Posted by Reading for Pleasure at 19:00