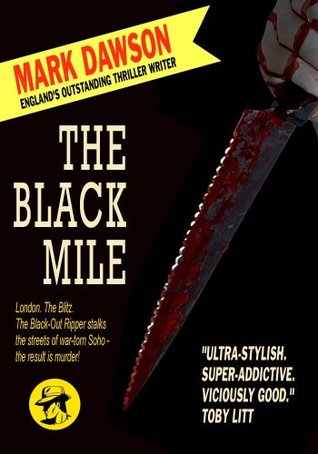 I found this hard to read at first – maybe because I was stuck in Milton brain mode rather than the setting that this book was written in.

Once I had overcome that – well Mark Dawson does it again.

Set in the 1940’s and written with the lingo that was used then was a challenge but Mark yet again pulled this off and I was hooked!!!

This book, set in 1940 London, tells the story of what is known as the Blackout Ripper; prostitutes being killed. Imagine that and then imagine London also under attack with the blitz and what a story you have on your hands.

Detective Inspector Frank Murphy is one of the police officers involved and has been advised to find the culprit fast. Teamed up with the fact that he is having personal problems as his 15 year old daughter has disappeared after she was told to stop seeing a boy.

We get to meet Frank’s brother Charlie who also works in the police force, there is some animosity between them; both working the same case; both with different ideas. You get the feeling that they are begrudgingly working together.

Throw in a journalist called Henry Drake and you have the story told from three different perspectives all entwined and done without confusing the reader.

Great book and can’t wait to read more by this author.
Posted by Reading for Pleasure at 19:06