The Sword of God – Mark Dawson 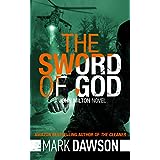 Amazon.co.uk - The Sword of God

Received as an ARC and read in exchange for an honest review.

The main character in this book is John Milton – This is book 5 of a series (but can be read as a standalone book as can the others). This was the first book in the series I read and I can guarantee that this won’t be the last.  Books 1 – 4 are loaded on my kindle to be read this year and looking forward to starting them.

John Milton has a very intriguing past, ex solider, ex assassin but a hero in his own rights.

This book is set in a tiny town called Truth and a town that Milton was planning on passing through until Truth’s Sheriff picks him up and drives him right through the town depositing him outside and tells him to continue on his way.  Now in the real world some might continue on their journey and not think any more about it (or maybe wonder for a split second why) but in Milton’s world that is not going to happen and John Milton proceeds to walk back into the town and check into a hotel (for what was meant to be one night) before proceeding on his travels again.

Upon checking in and then going to the bar in the town for a drink and food, trouble finds him in the form or a bar brawl and he is soon spending the night in a cell rather than a hotel bedroom.  Upon release the following morning, a witness to the bar brawl Mallory Stanton tracks him down and asks for his help in finding her brother Arty (a vulnerable boy) who has become involved, through no choice of his own with a group of bank robbers, which the FBI are trying to find.  Mallory in the meantime wants her brother found before the FBI does.

This isn’t a job that Milton really wanted to do but Mallory had that persuasive way of saying she would do it on her own knowing that Milton would eventually be persuaded to help.  He does as does a FBI Agent called Ellie.

The book is then fast paced and a rollercoaster of a ride, involving camping in the forest, Christian militia group, the local police force  and Milton himself getting hurt.  It is a book that you will have to pick up to find out the rest of the story.  It is worth it and needs to be read!!!

Well worth the 5 stars it has been given and a pleasure to have the opportunity of reading this book.  Thanks Mark and look forward to reading more of your books – especially since 2015 is the year you have chosen to be a full time writer.  Good luck – on second thoughts you don’t need luck with books written like this.
Posted by Reading for Pleasure at 19:49