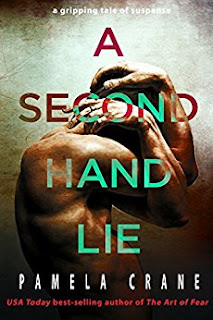 I found her in our living room, bleeding and close to death, but alive. Barely. Until morning stole her last breath. The media called her killer the “Triangle Terror” … and then forgot about her. But I never forgot—my murdered sister, and an investigation that led to my own resurrection from the dead.

Twenty-two years ago, on a cold February night, Landon Worthington lost his father for the last time. After an armed robbery gone wrong, evidence and witness testimony pointed a shaky finger at Dan Worthington—deadbeat dad and alcoholic husband. But before the dust could settle over the conviction, Landon’s preteen sister, Alexis, is murdered in their home, plunging Landon’s life into further despair.

Two decades and a cold case later, Landon is dogged by guilt over their estranged relationship and decides to confront his incarcerated father-of-the-year about what really happened the night of the robbery. But the years of lies are hard to unravel. And the biggest question of all haunts him: How does everything tie into his sister’s murder?

And so begins Landon’s journey to piece together the puzzle of secrets, lies, and truths that can free his father, avenge his sister, and perhaps save himself.

A short mystery perfect for fans of Robert Dugoni's Third Watch and Dean Koontz's The Neighbor.

Read as a standalone or as the companion book to A Secondhand Life.

A Secondhand Lie is a short story and was a lovely filler between longer books and one of my own personal TBR list.

The book was the second book in “The Killer Thriller Series" but can be read as a standalone story.

A Secondhand Lie is a short story that I managed to read over two days on my commute to work only as I had company on the commute home so was read in about an hour or just over and I found that it gave a good insight into the characters and enough a story for you to loose yourself in.

The book also gives you some background for the first book in the series “A Secondhand Life” which is also on my never ending TBR list and also features some of these characters.

A Secondhand Lie centres around Landon Worthington and the imprisonment of his father Dan Worthington.

We learn what Landon thinks and how he believes is dad is innocent and tried to piece what happened and how Landon goes about trying to sort things out.

The end to me was perfect.  However I do look forward to reading the first book called “A Secondhand Life” to see if what I feel were loose ends are tied up or made clearer.

I am a professional juggler. I juggle four feral kids (sometimes literally when they all want to be held at the same time), a husband, a horse farm, my writing career as a published author, and an editorial job… and that’s just the beginning.

Amazon UK
Posted by Reading for Pleasure at 09:00