Today I am pleased to be able to participate in the blog tour for Mr Snuffles’ Birthday by David Greaves and Illustrated by Emily Wallis.  My thanks go to Faye Rogers at Authoright. 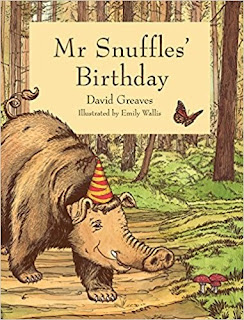 
'It was a wonderful day for snuffling for truffles,

Adults and children of all ages will delight in following Mr Snuffles' frustrating woodland quest for his beloved truffles. But is Mr Snuffles on the right scent?

Beautifully illustrated by Emily Wallis, David Greaves' Mr Snuffles' Birthday is a glorious celebration of language, friendship and truffles: a tale to be treasured and to read aloud together time and time again.

Today I am pleased to be able to share with you five, yes five of the writer David Greaves favourite childhood books.  Do let me know if any of your favourites are in here.

This little anthology of poems became a well-worn story-time favourite of David and his brother Peter. They endlessly enjoyed reciting Daddy Fell into the Pond by Alfred Noyes:
Everyone grumbled. The sky was grey,
We had nothing to do and nothing to say.
We were nearing the end of a dismal day,
And there seemed to be nothing beyond,
THEN
Daddy fell into the pond!....

Another favourite in Bedtime Rhymes was Under Ground, by James Reeves:

In the deep kingdom under ground
There is no light and little sound.

Down below the earth’s green floor
The rabbit and the mole explore.

…In the dark kingdom under ground
How many marvellous things are found!

David loved hearing and reading AA Milne’s enchanting tales of Winnie-the-Pooh, Christopher Robin and their friends confronting life’s ups and downs and each other’s quirks and eccentricities with a mixture of innocent optimism and tolerant amusement, in an idealised countryside where adventure-filled days stretch out with the timelessness of childhood itself.

In common with so many of his age-mates, David loved the Tintin books for their fast-paced action, exotic locations and their unforgettable cast of eccentric characters – also perhaps for the strong clear lines and bright colours of the illustrations. Hergé creates vibrant, absorbing parallel worlds for children to escape into for hours at a time.

Martin Jarvis’ enthralling renditions of William’s adventures with his gang entertained the whole family on countless long car-journeys to visit relatives, or while heading off on holiday. William may well have been one of David’s foremost childhood alter egos. His mum certainly regarded the William books as her most trusted Dr Spock-style guide to child-rearing.

Story-tapes featured prominently in David’s childhood. Michael Crichton’s Jurassic Park, thrillingly brought to life by a gravelly-voiced American narrator, became the stuff of family legend, with many quotes from the story turning into shared reference-points in conversation for years after.

Years of bedtime stories and poetry, David’s own wide reading, and all the audio books the family listened to together provided rich nourishment for David’s developing imagination, and gave him a keen ear for the range, rhythm, power and delicacy of the written and spoken word.

Born in Yorkshire in 1985, David Greaves’ warmth and generosity of spirit, and his love of travel and adventure led him to make friends around the world with people from all walks of life. His strength of character and devotion to achieving his goals was shown in his achievements as an ultra-marathon runner and Iron Man triathlete. It was also shown by his determination to finish this book, and nine others, after being diagnosed with Motor Neurone Disease (ALS) in June 2015, just after his thirtieth birthday. In the fifteen months after his diagnosis he got married to the love of his life, climbed Mt Kilimanjaro, raising over £12,000 for the Motor Neurone Disease Association, and travelled through East Africa before settling in Newcastle upon Tyne. As David lost the use of his arms and speech he finished his collection of children's books using revolutionary Eye Gaze technology which allowed him to type by tracking the movement of his eyes. David passed away peacefully at home in September 2016. Mr Snuffles is David's first book and his wife Philippa and family intend to honour his memory by eventually publishing all of his completed works. 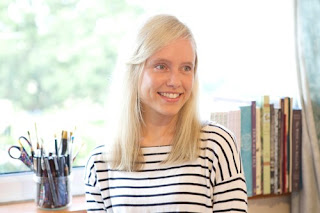 Emily Wallis is an illustrator who uses traditional hand-drawn techniques. She completed her MA in sequential design and illustration at the University of Brighton. She lives in London, UK. 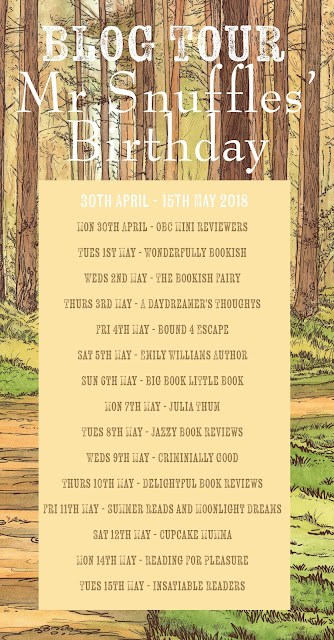 My thanks to the author David Greaves for sharing his favourite childhood books with me, the publishers Clink Street Publishing and also Faye Rogers @ Authoright for my spot on the blog tour.