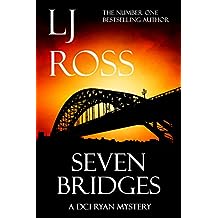 Ryan's most explosive case yet…


It's been five months since a killer walked free and DCI Ryan is preparing to leave Newcastle to hunt him down - this time, for good.

But Ryan's plans are scuppered when events take a dramatic turn and he is forced to stay and face his past one last time, or watch a friend suffer the consequences.

Amid the chaos, another killer is preparing to strike. When the Tyne Bridge explodes, Ryan's team are faced with a frantic race to uncover a deadly foe who won't stop until every bridge is burned, along with everybody on it...

Murder and mystery are peppered with romance and humour in this fast-paced crime whodunit set amidst the spectacular Northumbrian landscape.

LJ Ross has done it again, grabbed me by the throat and dragged me head first into what I would describe as a rollercoaster of a ride.

Anyone who follows my blog knows I’m a MASSIVE fan of the lovable DCI Ryan and the way he goes above and beyond his duty to solve cases along with his team.

Seven Bridges has two stories running through it, someone who is out to blow up the bridges no matter who may be injured or killed along with the other story of a close friend of Ryan’s who turns up on his doorstep covered in blood and needing his help.

Right at the beginning of the book we are given further insight into the back story of Ryan’s life with Jen Lucas and what actually happened all those years ago.

I felt myself racing through this book and couldn’t wait for my commute to and from work to read this and also some of my lunches and it is not often I can say that I am happy to be going to work early in a morning.

LJ Ross does a brilliant job of drawing the reader into her books and keeping them there before releasing them at the end of the book, breathless and feeling like I have been on a rollercoaster ride (I’ll be honest here I am not one for rides like that), however if the next book is going to be like this one was then I’m happy to be taken on that journey.  In any event after reading Seven Bridges I cannot wait for the next one and already have this pre ordered on my kindle.

LJ Ross is the author of the international #1 bestselling series of DCI Ryan mystery novels. Her debut, Holy Island, was released in January 2015 and reached number one in the Amazon Kindle UK best sellers chart.

Since then, she has released a further seven full-length novels in the DCI Ryan Series, all of which have been top three bestsellers. Cragside, Dark Skies, Seven Bridges and The Hermitage (due for release 20 October 2018) were all #1 in the UK on pre-orders alone.

The novels are available to purchase in e-book, paperback and audiobook formats on the Amazon store, as well as in selected independent bookshops. Holy Island is also available in German translation.

Louise was born in Northumberland, England. She studied undergraduate and postgraduate Law at King's College, University of London and studied abroad in Paris and Florence. She spent much of her working life in London, where she was a regulatory lawyer for a number of years before taking the decision to change career and pursue her dream to write.

Now, she writes full time and lives with her husband and son in Northumberland. She enjoys reading all manner of books, travelling and spending time with family and friends.

If you would like to connect with LJ Ross, she would be very happy to hear from you:

Amazon.co.uk
Posted by Reading for Pleasure at 07:30