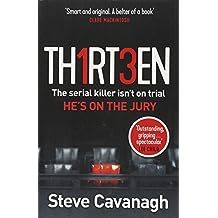 'To your knowledge, is there anything that would preclude you from serving on this jury?'

Murder wasn't the hard part. It was just the start of the game.

Joshua Kane has been preparing for this moment his whole life. He's done it before. But this is the big one.

This is the murder trial of the century. And Kane has killed to get the best seat in the house.

But there's someone on his tail. Someone who suspects that the killer isn't the man on trial.

Kane knows time is running out - he just needs to get to the conviction without being discovered.

Thirteen had me intrigued before I even opened it up to read with the tagline “The Serial Killer isn’t on trial, he’s on the jury”.  Now that to me is a great tagline and one that would have me picking up the book off a bookshelf.

This is the first book I’ve read by Steve Cavanagh.  I found that the start of the book was a bit slow but think that’s because of all the hype I’d heard about this book and normally I only read a book that has had loads of hype after the hype has died down.

The book was an enjoyable read and I found once it got to the trial that I was more interest and found myself reading faster.

All in all this was a good book and an enjoyable read and I will at some stage read the earlier books that this author has wrote.

Steve Cavanagh is a critically acclaimed, award-winning author and lawyer. He is also one half of the Two Crime Writers and a Microphone podcast.