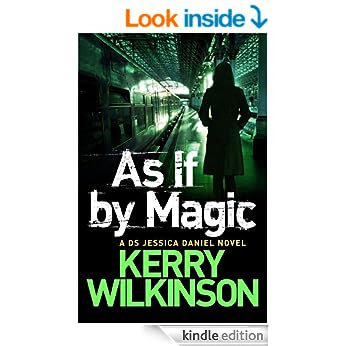 Amazon.co.uk - As If By Magic (Jessica Daniel #2.5) Kindle Exclusive

After finding an abandoned package at Manchester’s Piccadilly Station, Detective Sergeant Jessica Daniel has two choices. One option leads to the entire North West transport network grinding to a halt—and more importantly Jessica missing her train—the other involves her opening the box.

For Jessica, the choice is clear—but what’s in the box, who left it, and how will it affect her weekend away?

This 50,000-word “half-book” was released to celebrate the one-year anniversary of UK no.1 bestselling novel Locked In being released. It contains a bonus features section, with scans of the original hand-written plot outline and the full first chapter of the upcoming Think Of The Children (Jessica Daniel book four).

It can be read standalone, or as part of the rest of the Jessica Daniel series.

Found this to be a nice short read in between books – another excellent addition to the Jessica Daniel series.
Jessica still has the banter between her and Dave and you get to know Hugo a bit more.  Great book and can’t really do much of a review or would give the story away.
Posted by Reading for Pleasure at 20:20