Rise of the Enemy (The Enemy #2) by Rob Sinclair 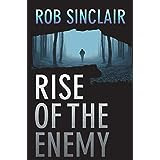 www.amazon.co.uk - Rise of the Enemy

This is the second book in The Enemy series and is just as good as the first.

Carl Logan up to his eyes in it as always!!!

Following on from Carl Logan recovering from a gunshot wound and not over the betrayal of Angela Grainger he's sent on another JIA mission to Russia.

However his mission is not all plain sailing, and doesn't go as planned, colleague killed, someone after him, someone determined to stop him no matter what. Closed safety deposit boxes whilst Logan was otherwise engaged being held in captivity.

Story is told in the present through flashback chapters (which I found hard at first) but all have the distinct Rob Sinclair flow which is a pleasure to read.

Carl is as usual struggling to understand the deception that is thrown at him and starts to have doubts about his boss Mackie. He can't believe / doesn't want to believe what's being told but still the doubts are making him cautious with all he meets!!

Great book and excellent follow up, look forward to reading the next instalment.

Posted by Reading for Pleasure at 19:10